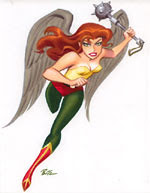 Hawkgirl
Originally uploaded by Devon Sanders.
Without a doubt, Justice League Unlimited is an incredible show. One, because of the characters. A show featuring Superman, Batman, The Martian Manhunter, Green Lantern, Wonder Woman, The Flash and Hawkgirl would certainly be at the top of any comics fans "Must See List," but a cartoon potentially featuring the WHOLE ENTIRE DC UNIVERSE...well, that's just adding chrome rims to the Escalade.

Two, for me, part of the show's enjoyment's been in the show's brilliance in casting its' voice talent. While watching last week's episode featuring Hawkgirl and several Thanagarians, I checked to see who was the voice talent:

What do these people have in common besides being fine actors? Well, they're all of Latin/Hispanic descent.

Did Justice League Unlimited's producers, consciously or subconsciously, roughly basing the warrior race of Thanagar on another race featuring a proud history of explorers, discoverers and warriors?

If they are, the, Justice League Unlimited is simply one of the most thoughtful shows I've ever seen. To too many cartoons, voice casting is just another detail. With JLU, it's become this beautiful thing unto itself.

Comments:
I changed the wording in my post, Joe. Ask someone Black how they feel about Africans who sold their own into slavery. I say it's unfortunate, it happened and no one can change it. You can't clean up history and accept the bits that read great on paper. You accept it as a whole and learn from it. Maybe I learned something today. If you ask and possibly not be so willing to tell, you can too.

If the casting directors are making some kind of statement about Thanagarians by casting Hispanic actors, what are they saying about the greater DCU by, as so many have noted, casting so heavily from Joss Whedon projects? Specifically Firefly?

Me, I'm hoping for a Nicholas Brendon Blue Beetle. Or an Anthony Stewart Head Phantom Stranger. Or an Eliza Dushku Power Girl. Or an Alan Tudyk Elongated Man.

Or Ron Glass as Mr. Terrific.

I don't necessarily believe they're making some kind of grand statement. Maybe, they think they may have hit upon something and are just rolling with it.

I'd say they just started with someone who had an accent, and so they went along with it when casting her fellow Thanagarians.

I didn't mean to sound condescending or anything, Devon. It just struck me as an odd thing to say.

In truth, I did learn something from you, Joe. I might have used terms that could have potentially hurt someone. You corrected me. No harm in that. The tone was sort of offputting, though.

I do this blog simply to have a good time, never to hurt. I'm not built for that.