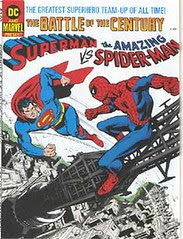 DC vs. Marvel
Originally uploaded by Devon Sanders.
According to the comics news website, "Newsarama," DC Comics has for the first time in five years, beaten Marvel in units sold and dollar share.

Fittingly, today a subscriber had me remove the following titles from his pull-list:

He had me add the following:

and he bought DC's "Prelude To Infinite Crisis," in order to get caught up on what he'd missed.

Should I be worried about customers dropping so many titles or thankful that customers aren't necessarily abandoning comics just certain formerly rock-solid Marvel titles. When I think about it, I can't take much joy in that as a retailer. ALL comics sales need to be strong in order for comics shops to remain vital.

For too long, Marvel's acted like a naked man walking into a bar sporting an 12" schlong. Not willing to work for attention, he expects everyone to just drop everything, swoon and reward him.

Instead, the people have moved to the other side of the bar where, quietly, a bespectacled man is accompanied by a suave gentleman with jet-black hair. They're having a fierce debate with a toned, olive-skinned brunette. Their words are fierce, yet never hurtful and manage to enthrall.

They've been doing this for years.

This time, the people take note and buy the three a round.

Pull it together, Marvel.

Comments:
I'd say Marvel's business plan from here on should involve getting the huge-schlonged naked guy to call up his best friend to be wingman, only when best friend gets there, naked schlong guy thinks it's actually Doctor Disguiseotron - in a sinister DISGUISE! And they beat each other with chairs for a solid three hours, screaming "Ya big palooka" and "You reckoned without ONE thing, ratzi - a naked man NEVER gives up!" And then they can work it out and be friends only naked man still can't make the rent on his own schlong and best friend's aunt is on the life support so they sit brooding in miserable silence.

Meanwhile, the three people in the corner are still talking and talking and you kind of had to be there at the beginning of the conversation to make any sense of it.

Now THAT, people, is powerful metaphor!