Jem and She-Ra Are SO Hatin' Right Now. 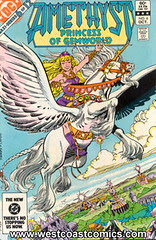 Amethyst
Originally uploaded by Devon Sanders.
After gaining the number one spot, units sold and dollar-wise, what's there left for DC Comics to do?

Yes, we all know that DC does superheroes and that they do them well, over the years they let us forget that they do other thing, so...

ripe with power, DC Comics seems to be embracing its' rich, diverse history.

They're bringing back war comics with the criminally long cancelled Sgt. Rock written and drawn by comics legend, Joe Kubert.

2005 also sees the return of sword-and-sorcery comics with The Warlord by Bruce Jones and Bart Sears.

War, westerns, sword-and-sorcery, sounds like the comics I was reading in the 80's.

To DC Comics, I issue a challenge....

Prove it by re-introducing your all-ages, girl-friendly series, AMETHYST, PRINCESS OF GEMWORLD to an all-new audience and dang it, do it big with a big-time writer and artists. Dang it, do it right!

AMETHYST, PRINCESS OF GEMWORLD focuses on the adventures of Amy Winston, who on her 13th birthday discovers that she was a princess from a far-away mystical land. Did I mention that when in The Gemworld she turns into a 20 year old woman, fighting injustice in a miniskirt, swinging a sword, while riding a winged unicorn?

We haven't seen Amethyst for years but we HAVE seen writers as great as Neil Gaiman and Geoff Johns along with various Legion of Superheroes writers crib bits from The Gemworld to make their own stories better. DC? Use Amethyst to make your UNIVERSE better, greater.

DC, be brave, be bold. Bring back AMETHYST!

Never read it when it was out, but everytime I pore over the old Who's Who that summarizes that cast of characters, and the geography, of the Gemworld, I feel that same geeky stirring.

Read over the original Books of Magic mini last week, and there she and the Gemworld were, given a full, glorious page, which bestowed up on them a position of importance in the DCU akin to Skartaris, wherever the hell Nightmaster went to, and Hell.

This series is one of the most prominent blind spots in my unsettlingly thorough knowledge of the DCU. I'd love to have it back. How many issues did it run?

Twelve issues and an annual, but I very well could be wrong.

I was such a child of She-Ra back in the day. It's a damn shame I missed being the target audience for this series by a scant few years when it was in print.

You could take one of a couple of paths with this, though.

If you wanted a series to tickle the nostalgia of old-school readers, you could hand it to Morrison and put out a "Seven Soldiers: Zatanna"-style mind-bending romp.

Which is, I might add, a perfectly fine idea by me.

But I think if you wanted to re-create the pre-teen girl series it was, I'd say represent the story as a manga series by Jill Thompson (ala At Death's Door), or make it hyper-stylized and colorful (in the vein of Teen Titans Go).

Or you could make it a Morrison/Thompson book and make me a very happy fangirl.

It ran 12 Issues in the original maxi-series, then some kind of annual or special or somesuch, then somewhere between 15 and 25 issues of an ongoing series, and finally one more 4-issue miniseries. Oh, and one crossover with Superman in DC Comics Presents.

I'd say put the original series back into print, in a mangaesque format, to start with. Then maybe the first year or so of the ongoing. But a new author (and the reprinters) might or might not do well to ignore everything that follows: a crisis crossover, and all the sudden the book starts to tie itself deeply into Dr. Fate metaphysics and Legion continuity at least two reboots old...

I am a 33 year old mother of three who LOVED Amethyst. In fact, I use her as an avatar. I see ElfQuest is doing a movie, lol I read about that as an up and coming comic in the pages of Amethyst. I would love to share the Amethyst story with my girls. They love the comics I still have, and a book format would be great. I do the book fairs for the schools and I think the 10-13 crowd would eat it up. RebeccaFlys.blogspot.com