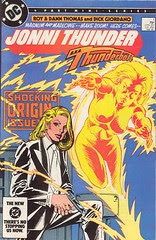 Jonni Thunder
Originally uploaded by Devon Sanders.
I remember, as a kid, being mezmerized by this comic. It had a bunch of things going for it. Words penned by All-Star Squadron writer, Roy Thomas. Gorgeous art by comics legend Dick Giordano.

Though similarly named after All-Star Squadron member, Johhny Thunder, from what I can remember the 1985 comic "Jonni Thunder AKA Thunderbolt" treated this as mere coincidence.

I was thirteen when this was released and 20 years on, the Giordano imagery still looks great to me. How could you go wrong with a pretty blonde and her butt-naked golden "genie" from Mr. Myxyzptlk's Fifth Dimesion? Oh, yeah. I seem to remember that my 13 year old eyes noted that Giordano drew the decidedly female Thunderbolt in a constant state of...excitement.

If so, too bad. This character seemed to have a good bit of story to tell. With her long absence from The DC Universe, she just may have some new and very interesting stories to tell.

Comments:
She did pop up (so to speak) a couple more times, in later issues of Infinity Inc. and Crisis on Infinite Earths. I wrote briefly on it here (the second post under July 8th, if it doesn't load right), with a pic of the promo poster!

I know the house ad you are talking about but it wasn't Jonni Thunder in it. It had a orange/brown character called (I think) "El Guerra" or something like that. She was in a cat costume and on a motorcycle. She eventually evolved into the Yolanda Montez Wildcat during the Crisis.

I just don't recall Jonni Thunder in the ad though.

Now that you mention it, you're right!

Now, I'm even sadder. Jonni got no love even then.

The thing I can't remember was if Jonni Thunder was on Earth-1 or not.

I mean, there was the evil Johnny Thunder who took over the Earth-2 T-bolt way back in the days when comics were fun.

But I don't know if Thomas set her stories on Earth-1 or Earth-2. It'd make sense for Earth-2 since every book he wrote (with the exception of Captain Carrot) was pretty much on Earth-2.

It came out in '85, a year before 'The Crisis." I can only assume (and I'm probably wong), that it must have taken place on Earth-2. That's probably the cause of her never truly becoming a factor in The DCU. She might have become a problem even as her first issue shipped.

OMG! I was trolling the internet for various comics-related stuff and saw this! I remember being just preadolescent and buying the last issue in this 4-part series just because I liked the way it looked and LOVING the story but not being able to get the first three. Thanks for the memories!