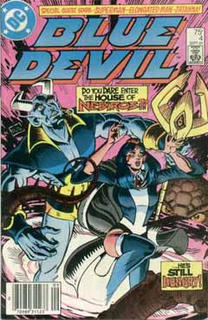 The Masters of The Universe. Spider-Man and His Amazing Friends. Thundercats. G.I. Joe. Puberty. Junior and Senior High School. Video games. Drug Wars. The Three Michaels: Jordan, Jackson and Tyson. Girls. Three younger brothers, all born within 7 years of each other. There was SO many distractions, so many things for a young boy to deal with in the 80's.

How'd I even come to comic books, much less, become such a huge DC Comics fan?

It's simple, really. Comics were and still are designed to make them your own. I tried dunking a basketball once, it didn't work out. I tried puberty, it worked too well. Comics, for me, allowed the world to go away for as long as it took to read them. I needed that back then. I still can't dunk a basketball but I've always been able to read the heck out of a comic book. I desperately wanted something that made sense, amidst men of steel and dark knights, DC Comics did that for me.

In the worlds of DC, I found out about ideals, overcoming obstacles, sacrifice. To a teenager wrestling with his idea of what the world should be, DC Comics came around at just the right time.

So, with that said, here's NUMBER FIVE of The Five Comics That Made Me A DC Comics Fan:

That's right, The Blue Devil. Yes, the writing was never stellar. The art, at times, was just plain weird but dang it, it was made with me in mind, the teenager. Stuntman Dan Cassidy turned superhero introduces me to idea of "the reluctant hero," further introducing me to the concept of "the weirdness magnet." Something I still reference to this day.

The thing that made this comic even more intriguing was the art of then newcomer Paris Cullins. Cullins, I believe, was the first American artist to use a "Manga" influence in a mainstream superhero comic. It was revolutionary then and to this day, after looking at it with fresh eyes some twenty years later, it still looks fresher than most of the "Manga" inflected nonsense clogging the shelves today. Cullins' version of Zatanna in Blue Devil #4, in my opinion, is still the sexiest of Zatanna images and he managed to pull it off without her trademarks, the top hat and the fishnets.

Blue Devil was a fun comic aimed straight at my head. Every once in a while, I break The Devil out of the long boxes for fun and it almost never fails to deliver in the details.

Comments:
I was of the opinion that Marvel pretty much invented the idea of the "reluctant super-hero." Spider-Man, Hulk, most of the FF, Iron Fist --- all the heroes with problems at home and in the mind, but went out fighting anyway. Even Thor was an Earth-based hero as a punishment at first.

Did you just not see yourself in Marvel's reluctant heroes, or were you turned off by their moping, or what?

Good question. I think I identified with DC more because their characters seemed to take more responsibility and I guess, joy, in their existence as a superhero. After a while, Marvel's "unwritten policy" of constant Pyrrhic victories lessened my enjoyment of their books .

I think that's why things like Identity Crisis and Infinite Crisis will work because Pyrrhic victories aren't an everyday occurence in The DCU.