Lest We Forget... Jim Aparo 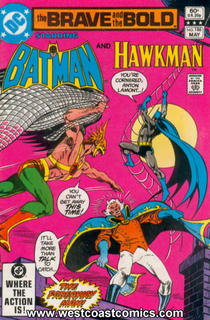 After hearing about the passing of comics great, Jim Aparo, I just wanted say a little something...

Not many artists can say that their job was to draw The DC Universe.

For over a decade, Mr. Aparo was charged with drawing DC Comics' best and brightest of heroes & villains in the pages of their premiere team-up book, "The Brave & The Bold." For many a young fan, his pen helped introduced them to The DCU on a monthly basis. He later went on to co-create one of the more influential and different of 80's series, Batman & The Outsiders, a title to this day, many of my comics shop customers cite as their "gateway" into comics. A title that, fittingly, lives on today featuring the son (Nightwing) of founding Outsider, Batman & Thunder, the daughter of Black Lightning.

Mr. Aparo and his talent will be greatly missed.

Comments:
You know, I just realized that when I started buying comics again as a teenager, after not having seen any since I was maybe six or seven, Batman & The Outsiders was MY first superhero book, too (after starting out with the Indiana Jones comic).