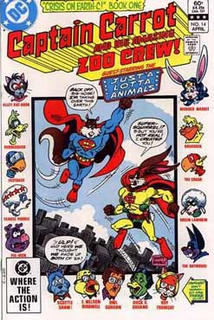 Yes, what you're looking at to the right IS an image of Captain Carrot and His Amazing Zoo Crew!

I will make NO apologies for liking this book at the time it was introduced. I was like, eleven or sumthin'! Just...just...let me explain....

This book taught me things. Things that make books like "Astro City" just that much more palatable. A little something called "homage." Until this book came along, I'd never even heard the word much less knew what it meant but just looking at Captain Carrot, my brain instantly connected him to Superman. Fastback, the speedster turtle was The Flash! Yankee Poodle kinda looks like Wonder Woman! You get the picture. The fact that The Zoo Crew and Superman were both recognized bits of the same DC Universe made their comics just that much mystifying to me. I mean, the possibilities just became amazing! If they were sorta in the same universe as Changeling (now known as Beast Boy), couldn't they meet?

It took a few issues but they did. From there, my little mind was officially blown.

Besides, how could you not love a book where DC Comics dusts off former 40's-50's "funny animal" staple, Peter Porkchops. After twenty years of limbo, Peter was re-branded as the alter-ego of Pig Iron, The Porcine Powerhouse. At DC Comics, they truly leave no part of the pig to go to waste. 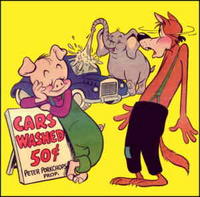 (Are those crickets I hear chirping out there?)

I'd never heard that before!

The Zoo Crew were crammed with ideas. Long before Alex Ross and Mark Waid turned every panel into a history quiz, the Zoo Crew were cramming panels with eye candy and funny jokes. Looking through my old issues now they are not as funny as I remember them, but to a kid they were a blast.

CCATAZC was one of my favorites too - I had every issue and then sold them after I "matured." I might have to track them back down now. Scott Shaw!'s art was fantastic and there was plenty of bad jokes.

That Justa Lotta Animals 2-parter (Crisis on Earth C/Crisis on Earth C-) is one of my favorite comic stories ever. Just brilliant DC self-parody there. Like so much else, DC should really collect this for the young'uns (and their parents who read 'em the first time around).

I third or fourth or whatever that idea. Zoo Crew was a fun, funny and usually fairly witty comic that should really be collected as a trade or digest and sold for nostalgia-buffs and kids.