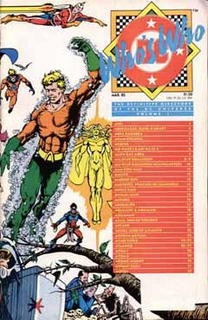 What else could it be but...

While the four previously mentioned comics were kickin my head in, "Who's Who" was was the donkey kick that flattened me out and set me straight. DC clued us into a character's importance using something as simple as page count. Minor character's got half-a-page, "B" characters (Adam Strange) a full page, major characters like Superman, a full two pages. Even sweeter was DC brilliantly matching each character's entry with art from either its' creator, current illustrator or an artist best known for their work on the character. For example, who could forget George Perez's beautiful two-page Wonder Woman spread. No character seemd too insignificant for entry into "Who's Who." Heck, even "Capt. Carrot and His Amazing Zoo Crew's" Little Cheese got a half-page entry drawn by his creator Scott Shaw! How very cool was that? Who could forget the sheer randomness of the art entries of one of Marvel's then up-and-coming illustrators, Art Adams? Why the hell was he doing the entries for "Catman" and "Punch and Jewelee" of all things?!? I wanted to know more about these characters. "Who's Who" simply made me give a damn.

You have to love a universe where Amethyst matters just as much to one person as Superman does to hundreds.

"Who's Who" was the book that showed me how to adore this improbable universe. A universe where heroes like Plastic Man & Captain Marvel still mattered despite not having been "born of this world."

Comments:
I agree. This had a certain light, all-inclusive tone that the Guide to the Marvel Universe -- which I seem to remember came out at roughly the same time -- just couldn't match.

A universe that had room for both Batman and Yankee Poodle? Sign me up.

Hear, hear! Who's Who was one of the DC books I looked forward to most anxiously back in the day and one that I read and reread endlessly, even though I had never heard of most of the characters. Given the current rage for history over at DC these days, your piece made me want to phone up mom and dad and get them to package up and send me all the old Who's Who issues that currently reside in my own personal comic book archive (also known as their basement). Thanks for the great countdown!

I know, "Anonymous." Marvel's "Who's Who" didn't even include Peter Porker, The Spectacular Spider-Ham, for God's sake!

Jim, I thank you for the really great compliments.

Y'know, usually when I see a "top [insert number here] favorite/influential/etc. cook" list, I can pretty much guarantee that I'm going to agree with only 3/4 of the list at most. And then I came across your list . . . Blue Devil? Check! Captain Carrot? Check! All-Star Squadron? Triple check! Crisis? How can I not hold a special place in my heart for the series that let me make by cousin cry by telling him Flash was dead? And I doubt that any comic I own is as worn and torn as my oft-read copies of Who's Who. I'm hoping that Marvel's recent revival of the OHOTMU will spark a similar revival at DC. Of course, I'd hope that they actually waited till after Infinite Crisis dies down so that we won't have that strange "half of what you read in the first part of the series doesn't apply anymore" disconnect of the original series.

I'm hoping that Marvel's recent revival of the OHOTMU will spark a similar revival at DC.

The Encyclopedia of the DC Universe pre-emptively took care of that.