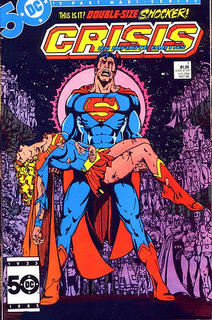 I remember reading Crisis On Infinite Earths #1 and thinking this is SO much better than "Secret Wars." Why? Because this one had permanence. C'mon, the book starts out with the death of a WORLD. The much-feared Crime Syndicate's. Not with a bunch of heroes and villains getting sucked into a metal donut, then being forced to fight each other like in "Secret Wars." No, a world died and we were forced to watch as it did so. That leaves a mark. Now, I'll be the first to admit the story doesn't hold up twenty years later but man, was it good for what it was. A chance to look at, quite possibly, artist George Perez finest work.

Gorgeous is an understatement when it come to the Perez-pencilled/ Jerry Ordway-inked "Crisis" pages. In any given panel, these two slather on as much attention to detail to say...a generic Cave Carson cave as they would to The Batcave. Whenever some snot-nosed "artboy" comes at me, waving his anatomically incorrect, over-rendered pages at me, this is the comic I break out to show 'em how it's done. It's just THAT gorgeous. 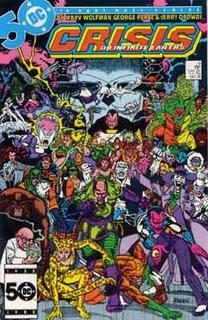 This book had consequences. Heroes went into the fray, ready to die so that others might live. Barry Allen died a hero's death saving the universe, thinking not of himself but of those he loved. Supergirl drew her last for her adopted homeworld. Wildcat found himself crippled saving a young boy's life. Who could forget the image of The Spectre growing big enough to, literally, hold back Earths 1 and 2 in a desperate attempt to stop their fateful collision. Wally West donned Barry Allen's Flash costume for the first time in its' final pages. Villains united for a greater cause. Who could forget the introduction of The Blue Beetle to The DC Universe. Watching him represent his world alongside such DC luminaries as Superman, Captain Marvel and Uncle Sam. Little did we know it wouldn't be this character's finest moment.

DC Comics changed its' world and changed mine in the process. I can't tell you how many hours I've wasted talking about how much folded-over paper and ink have come to mean to me but with each flip through this book, I realize it was time well spent.