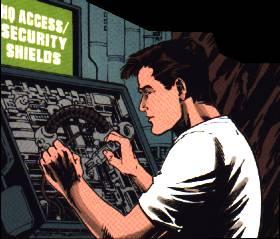 Hey, what're you doing there, son? Is that a JLA thermonuclear device you're toying with?

Of course it is, you're SNAPPER CARR, that's what you do. You thought you were helping.

I guess that's what a JLA mascot does. They get all "Zan & Jayna" and "help" things up for the heroes to have to fix.

Snap, you're a walking plot device. You're our Rick Jones.

See? All's missing from Rick is a constant snapping of fingers like some member of an Appalachian music quartet.

Snap, I know you didn't mean to sabotage The Justice League by letting The Joker into their SECRET LAIR anymore than Rick Jones meant to fall asleep at a gamma bomb testing site. It's O.K.

You're Snapper Carr, that's what you do. You're just full of Marvel goodness. You're "Cold War," baby! That goes a long way at Marvel, Snap.

Besides, I have a sneaking suspicion you somehow kept Robin out of The Justice League.

Maybe when you go to Marvel, you can mentor young heroes there like Rick Jones does in "Runaways."

Wait a minute! Snapper, you used to mentor "Young Justice" waaaay before Rick got the idea.

God, someone took a page from "The Snapper Carr Playbook." (Shakes head in bewilderment)

See ya, hepcat! Say "Hey!" to the "squares" at Marvelsville.

Comments:
Baby, you're so far into a wrong-o scene, you're like - nowheresville, cat! How could the with-it, way-out, swingin' DCU survive if its number one bop-talk lingo-swinger did the funky monkey straight into a traitorous scene? It'd be like a nightmare groove, daddio! There'd be nothing to protect the DCU against a deadly double-barreled barrage of beat-speak - an assault of avuncular alliteration by the massed mavens of Marvel melodrama, terrifying twinned with the happening hipsterisms of a hyper-hepster who happened to hold a heapin' helpin' of hate for the haughty haven he'd hitherto hailed as home! And with Bernard The Poet on their side, would it be long before that noble Dark Night was doing the Batutsi, Green Lantern was growing his sideburns to the breaking point and Superman was becoming the Beatle of a Billion BC??

Say it ain't so, Snapper!

Nah, the Snapper Carr of Young Justice and Hourman is definitely a DC character... Also I would love to have that Brainiac t-shirt of his.

But this post had a interesting side effect: I can't stop thinking about a Amalgam title called: "Snapper Jones: Walking Plot Device".

But, if Robin was in the Justice League, the Teen Titans might never form.

Of course, I have a suspicion that Scip is gonna ship most of Wolfman's characters over to Marvel before this is all over.