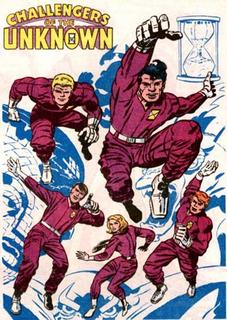 I've never been able to understand them, these CHALLENGERS OF THE UNKNOWN. As a kid, I used to MARVEL at the similarities between this and another quartet of adventuring, crash-surviving science heroes. I think it had something to do with the matching purple jumpsuits.

Who wouldn't love a team comprised of a pipe-smoking professor (Prof.), a young hothead (Red), a hulkish bruiser (Rocky) and some guy (Ace). So, you ask, where's the blonde woman to set things right? Well, a certain June Robbins came along just a while later to set things right.

Did I mention that The Challengers Of The Unknown were created by Jack Kirby in 1957? Four years before he went on to create The Fantastic Four for Marvel. The fact that they're DC Kirby creations should be enough to send them packing but what makes me want them gone is the simple fact that...well...they don't fit anymore.

They're just so damned Silver Age. They were created for a universe short on superheroes. A universe that hadn't quite let Barry Allen (The Flash) take hold. The DC Universe doesn't have this problem anymore. That's why we're doing this little exercise. Should problems arise, DC's superhero set are always more than up to the challenge. The Challengers were an idea, simply, ahead of their time and place. Plain and simple.

Only in The DCU can that not be such a great thing.

Comments:
Yeah, but the thing about superheroes is that you pretty much have to hope that they (a) notice your problem and (b) consider it worthy of their attention. You can't just call up the Justice League the way you can the Challengers.

Also, superheroes only deal with stuff if they think it's a threat. The Challengers will look at the crazy stuff going on in your neighborhood just because it's crazy and they like looking at crazy stuff.

I like looking at crazy stuff, too. I'm lacking a purple jumpsuit to look at the crazy stuff.

They should come back (again; IIRC, the very first Loeb/Sale collaboration was a CotU mini) just so Prof can say, "Back off, man, I'm a scientist."

Come to think of it, Ghostbusters may be the perfect model for the role of the Challengers in the DCU.

Never got excited about the Challs. For some reason, a non-powered team just never got my attention. I guess I could give 'em a try nowadays but... what do they have to offer that books like Doom Patrol don't?

Next you think Cave Carson, Rip Hunter and the Seadevils should be donated as well...