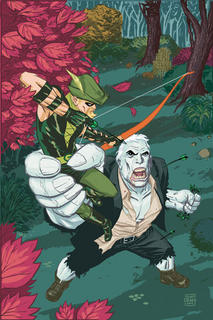 Finished a new reveiw for "CHUD: Thor's Comic Column" (See the "Links" section) spotlighting Green Arrow #53 and a return to the "mainstream" for Bill Messner-Loebs.

As usual, here's the first paragraph:

Few creators can boast about compiling significant writing stints on such diverse-in-tone characters as The Flash, Wonder Woman, Hawkman, Thor, Impulse and The Maxx. Few can say that they wrote them well. Bill Messner-Loebs can and he has every right to. During the 90’s, I was constantly amazed by the man’s ability to somehow interpret Sam Kieth’s perplexing “adventures” of The Maxx. I read his four-year run on The Flash where he, not Mark Waid or Geoff Johns, re-introduced many a new fan to the fabled “Rogue’s Gallery.” I was pleasantly amused in his attempts to depart on Wonder Woman, humanity by having The Amazonian Princess get a job in a fast food restaurant. While Messner-Loeb’s never appeared on Wizard’s list of “hot” writers, the people who read his work knew his voice to be one of the most unique in comics.

It should post soon soon. I humbly ask you to read it.

Comments:
A nice article. I really liked his Flash, though I got out of comics before he went to most of that other stuff.

BTW, in this phrase: "to depart on Wonder Woman, humanity". I think you want to use impart. I could be wrong, but I don't recognize 'depart' being used that way.