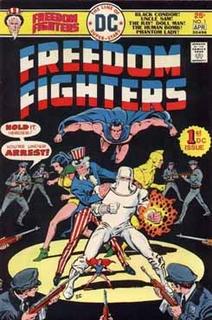 Where are The FREEDOM FIGHTERS?!? I mean, the stories you could tell! The Freedom Fighters are a government sanctioned superhero group based out of The Pentagon, fighting any menaces, at home and abroad, the government calls to their attention.

Led by The Fighting Spirit of America, UNCLE SAM, who's prone to bouts of madness and rage whenever America feels out of whack. The Fredom Fighters are composed of:

THE HUMAN BOMB, a human bomb!

DAMAGE, another human bomb but wait...this one has super-strength and endurance, to boot. He could blow stuff up all day long!

PHANTOM LADY II, a scantily-clad young lady whose weapons allow her to cast "blacklight." She wast trained in the art of espionage by The Original Phantom Lady, a former U.S. senator's daughter.

THE RAY II, the son of The Original Ray, he's a living solar battery, who much like The Human Bomb and Damage is prone to explosion.

and THE BLACK CONDOR II, he's like some manic-depressive, Native American who works for the government. He flies, too.

So, to recap, that's the spirit of jingoism, three guys who blow up, an exhibitionist and a depressed Native American federal employee.

Can you imagine these guys in foreign lands "peace-keeping?" I can.

I call out to The Great Spirit, Grant Morrison! I beg of you! Take these characters into your Scottish heart and give them a proper home! Now, more than ever, the world needs Morrison on The Freedom Fighters.

Comments:
Actually, he already is! I remember a recent interview where Morrison said that Dan DiDio asked him if he had any ideas for the Freedom Fighters, and he'd already had pages and pages of ideas he'd come up with in his spare time. This was what impressed DiDio so much that he gave Morrison his upcoming post of DCU idea man. So I think we can safely say that there's going to be a Morrison or Morrison-inspired Freedom Fighters series coming up.

The current team is missing something, though--Kid Eternity!. Imagine how much more awesome the team would be if they had someone who could summon up Attilla the Hun to kick terrorists' asses! The original one died in JSA, so this could be a new version, maybe female, because the team needs another female member. She could be a history graduate student in her civilian identity.

They'd still need another member, so they could have the archetypal seven. Who do you think it should be? Max Mercury, who was originally the Quality hero Quicksilver, a great character who desparately needs a new role now that Impulse doesn't need a mentor anymore? Shrinking superheroine Doll Girl? Kick-ass time-displaced aviatrix Lady Blackhawk? (OK, that's cheating a bit, she was a DC character but the original Blackhawk was a quality character.) A new Spider/Spyder? (He could have had another previously unknown brother who took over after the previous two died.) The Red Bee, who could, um, control bees? Or even a new incarnation of... Madam Fatal?

It has to be THE RED BEE!

That's a little like telling us Sean Connery is appearing on this week's episode of Two and a Half Men..

I like the idea of Doll Girl and other esoteric types to balance out the blasters. Lady Blackhawk might also be extra-cool if she has a VTOL jet capable of handling air support.
Hmmm...

BTW, just got a text message from the Gulf Coast that my mom's okay. (Huge sigh of relief and thanks here.)

The guys showed up a few months ago in JSA #73 for about 3 panels and I felt cheated. It's a shame that DC has so many great characters floating around that never get used but Superman and Batman have like a dozen titles between them.

As far as additional members go, I'd like to see Doll Girl and even though she's not a Quality character I think the new Bulleteer would fit in with this group.

And you can't not have the Red Bee.

Their appearance APPEARS to be the obligatory "slaughtering of minor characters."

After, of course, some character devolvement of Uncle Sam.

I want to see a fight between Phantom Lady and Sun Girl. Phantom Lady can make things dark but Sun Girl has a Flashlight!

Great book from the 70s. Deserves to come back, except for forget when Jon Ostrander turned Uncle Sam into some sort of Robo-Patriot. Am I mistaken or did the 70s version of this group also include Doll Man?