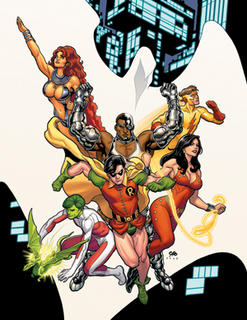 I will gush later.

Why? Can't tell you, been sworn to secrecy but Hawkman fans, take note:

Two comics LEGENDS will be taking a crack at the book. Legends IS NOT hyperbole.

DC Comics employees asking Mike Wieringo when he was going to come and do some work again for them. Wieringo saying he absolutely LOVE to do some work for them.

What you didn't want see:

Me damned near weeping when he told them he had a few more years left on his Marvel contract.

Mike Wieringo, if you didn't know, is one class act. If you've read his blog (See "Links" section), you know that his back has been preventing him from sketching at convention. Those con tables weren't necessarily designed for sketching. On day two, anyway, he gutted it out, doing sketches for donations to ACTOR. He also brought alot of pre-drawn sketches for sale to the con. I bought two gorgeous Wonder Woman pieces. Money well-spent. (I had one inked by Superman/Batman's Dexter Vines. If you'd like you'd see it check for it on Mike Wieringo's Blog which can be found in my "Links" section.)

If you ever find yourself in Baltimore during the convention: go. It's that simple. The atmosphere is relaxed. The creators are relaxed and first-rate. Baltimore Comicon is simply designed for "feel good."

Comments:
As a Hawkman fan, I cannot wait for the revealed identity of said legends.

You probably have no idea who I am, but I'll clarify.

I then found the link to here in the comments to Mike's blog and so what I'm writing this comment here for is to thank you for sending in that scan and to let you show the result.

The finished colored sketch is here I hope you like it. (You can let me know at icemotion@gmx.net)

I went last year and the convention was great! I wish I could have gone this year too.

Legends on Hawkman? Hmm... I am intrigued.

I don't care if Rob Liefeld draws Hawkman, just so long as it shows using his mace like a meat tenderizer on Batman's head.

Neal Adams would be cool on Hawkman, but I don't think it's him.

I remember you writing something about two legends on Hawkman a while back. I always assumed it was going to be one of the Kuberts (pa or sons), and maybe Mark Waid, or somebody like that.

"...with Walt Simonson coming on board as writer and Howard Chaykin joining as penciler..."

Legends it is. Surprised it's not a Simonson and Simonson pairing (that was a great TV show - HA!). But my joy was tempered by the preceding sentence...

"Hawkman changes its title to Hawkgirl with issue #50..."

Well, hopefully Chaykin's bodaciously-endowed Hawkgirl will resonate with make it a big enough title that Carter gets his own spin-off.