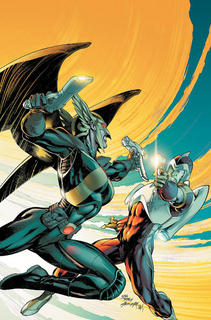 Let's just get it over with. For nearly five months, the blogosphere has been waging a war. A war no one seems to fight any longer.

How in the world could a comic featuring The freakin' Green Lantern Corps, Hawkman, Hawkgirl, Hawkwoman, Captain Comet and the Canadian, Adam Strange leave me so cold? The book's all premise. Initial premise, anyway. Once you get past the novelty of space team-ups, there really ain't much going on so far. Hell, I think a guest appearance by Space Cabby would be in order simply to liven things up a bit.

With that being said, "Seven Hells!" would like to OFFICIALLY call a truce due a to lack of interest and accumulated ambivalence in the comics saga, THE RANN/THANAGAR WAR.

When comics are poorly written, everybody loses.

Now let's get back to talking about what TRULY matters. Power Girl's BOOBS. 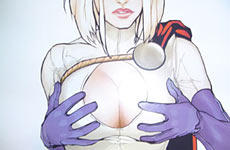 And what will you do in 3 months when Power Girl is dead?

How could Day of Vengeance have Detective Chimp and Rann-Thanagar War not have Space Cabby? (Or even Doiby Dickles?)

Ashtur, I shall become a bat.

Yes, I can equivocally stand behind Power Girl's boobs.

As odd as that may look.

Of course you can.

You could fit a small car behind Power Girl's boobs.

I'd rather stand in FRONT of PG's boobs. CLOSE.

Anywho, I was wondering when the war was gonna be over...