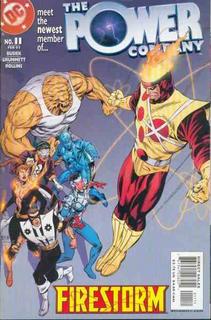 We put to a vote and the people have spoken! The Power Company, a team that makes Marvel's The Champions of Los Angeles look like...well...champions, have been voted off the island and look...

Is that "Seven Hells'!" first "donation," Firestorm, The Nuclear Man preparing to spirit off his former associates on a journey to The Marvel Universe?

Wait a minute! On second thought, the look on his face says he may actually be laughing AND simultaneously distancing himself from them! Damn, it's pretty sad when Ronnie Raymond rejects you...twice.

Damn, we're going to have to start making donations to Valiant Comics...