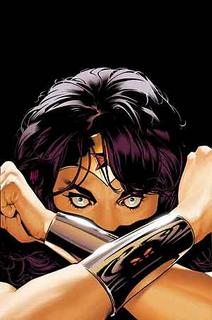 Of The Big Three (SUPERMAN, BATMAN & WONDER WOMAN), only Batman can lay claim to having a Rogue's Gallery worthy of their character concept. Sure, Superman has Lex Luthor but on the downside he suffers The Terra-Man, a botany-cowboy who rides a Pegasus. There will be no action figures made for Terra-Man.

If you wanna look at a solid Rogue's Gallery, look no further than The Flash's.

Now, THAT is a Rogue's Gallery done right if I've ever seen one. During Geoff Johns Flash run, he built up each individual into a force to be reckoned with, imbuing each Rogue with motivations, pathos, turning them individually into someone to be reckoned with. In The 70's, they were rendered virtually ineffectual by writers and editors whose first idiotic notion was to have them all team-up, only to have them be soundly defeated in the space of one issue. That, my friends, is shortsighted nonsense.

In wrestling, you have what you call a "booker." The booker is the guy who decides which "heels" (villains) and "faces" will wrestle on the "card" (show). In order to make the card work, you have to build a monster. Now say you have two young guys full of promise and individually, they have nothing to do. You could turn them into a sucessful tag-team by having them win a win a few well-paced matches. If you've done your job as booker well, the fans will believe to be a force to be reckoned with. The fans will practically beg to see them get a shot at the title. If booked properly, you SHOULD have a monster tag-team on your hands, a team anyone would conceive as a viable threat to the champions. Not so if, early too in the game, you feed them to the monster. You have to build the monster, people.

Wonder Woman doesn't have many monsters.

Let's look at her Rogues Gallery, shall we?

Aside from The Cheetah and Doctor Psycho, there really ain't many viable threats to work with.

I don't think so. Good villains for Young Justice, not an armor wearing, battle-axe weilding Amazing Amazon. So, which DC Universe villains are worthy of a Wonder Woman?

(Sinister laughter arising from my throat.)

Find out later this week in Part Two of "Johns-ification: Wonder Woman!"

Comments:
I'm not even sure I'd regard the Cheetah as a credible threat. Last time I looked she had a power level more apt for a Spiderman villain than Wonder Woman. Better than her Batman level Earth 1 counterpart, or her Robin level earth 2 counterppart.

If I were writing Wonder Woman I'd use Dr. Psycho, Circe, and various villains from Apokolips. I'd also give the Cheetah a power boost, have Ares and other Greek mythological beings like the evil Titans appear, and have a rivalry with the Norse pantheon. Marvel may have them as heroes, but much of they could easily be seen as villains as well. Maybe an updated Baron Blitzkrieg as well.

The problem with Circe is that she's overused (as one ofthe few WW villains people remember), and nigh-omnipotent, depending on who writes her. It's like Mr. Mxyzptlk: best used sporadically.

Other DC villains who might be interesting against WW:
- Shimmer & Mammoth (from that villain-group that fought the New Titans and Outsiders, whatstheirname);
- Dr. Phosphorus (who never really fit into Batman's already-packed Rogues' gallery, too powerful for Bats but just fine for WW);
- Killer Frost, the freezing nympho psycho;
- The Grey Man (old JLI baddie who enslaves souls);
- and KOBRA!