Lest We Forget...John Ostrander (Updated) 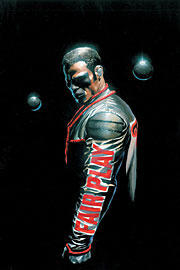 In the late 80's and early 90's, DC's characters were learnin' a li'l sumthin called "angst." While learning "The Angst," they also found the time to learn dying, getting their backs broken, going crazy, creating Green Lantern Corpses, losing their mantles in combat to teeth-gnashing redheads and getting their hands gnawed off by pirahna.

During all of this one writer kept a level head and kept creating. That man was John Ostrander. During this time period, this man quietly but surely, created and wrote some of the best comics DC was putting out at the time. Suicide Squad and The Spectre. For those that don't know, The Suicide Squad was team comprised of some of the meanest and nastiest villains The DCU had to offer...

No. They weren't. In truth, they sucked but under the words of Ostrander they became viable threats to humanity. The Squad were villains who the government had in their employ and should they succeed in whatever suicide mission they were sent on, inched just that much closer to release. Simply put, in order to live, they had to be willing to die. I was fascinated. The members of The Suicide Squad suddenly developed personalities past the ones allowed for in their previous status as "fodder of the month."

Captain Boomerang, a Flash villain, became a character not even a rogue could trust. Coincidentally, Boomerang was the villain that, arguably, set off the chain reaction reverberating throughout DC Comics' united villainy in his killing of Robin's father, Jack Drake. Boomerang's son is poised to become an even bigger, more dangerous threat. Deadshot, a Batman villain, became a man apart. One with one thing to live for and in the Deadshot" mini-series, STILL one of the most disturbing and dramatic comics I've ever read, it was violently taken away from him.

Ostrander also created the head of The Squad, Amanda "The Wall" Waller. A woman whose fierceness within is rivaled only by Batman and Lex Luthor within The DC Universe.

Believe it or not, this isn't Ostrander's greatest contribution to The DC Universe. When The Squad needed information they turned to a new, unseen information broker, The Oracle. Oracle was created within Suicide Squad. Ostrander, working with his wife, the late Kim Yale, took the crippling of Babara Gordon, a tragic plot device from the pages of Batman: The Killing Joke and turned her into a character that mattered, one with her own identity and motivations.

In the pages of The Spectre, Spectre's alter ego, Jim Corrigan finally dealt with the crushing weight of being tethered to the right hand of God, The Spectre. The results, more often than not, were fascinating. Also during his definitive Spectre run, Ostrander created the current "Man Of A Thousand Talents," Michael Holt, Mr. Terrific. Did I mention that Mr. Terrific is the current leader of The JSA?

When you think of DC Comics, John Ostrander's name may not immediately come to mind but when it's all said and done, no one's done as much for "post-Crisis" DC Comics.

Anyone who disagrees with anything in your post should be thrown into an open grave and buried alive under a pile of the last decade's worth of Batman comics.

Ostrander's Suicide Squad was the best monthly comic published in it's day. Any idea how we can convince DC to revive it with Ostrander at the helm?

All who would argue are wrong.

And shall be mocked.

His other books were great too, dammit.

You are so right.

Ostrander made Firestorm, The Force of July, and Count Vertigo cool. He should get a frickin' Eisner just for that.

How is it that I don't have a link to Seven Hells! on my blog. I must fix that...

What it was, really, was a procedural comic before there were procedural comics. There's a realisitic grit, without the leaden grimmness that so often accompanies it. Background characters like the warden or the priest step to the fore, get moments to shine, and sink back into the weave of the larger story.

Gotham Central owes more to Suicide Squad in tone and feel than it does to Batman. It's Queen and Country, if Tara happened to be possessed by an incubus from a nightmare dimension....

Suicide Squad is still an amazing read even now. It's drowning in great characters from Raven to Waller to Bronze Tiger. He took one joke characters like Punch and Jewelee and made me care about them.

I also really enjoyed Ostrander's Martian Manhunter run. He did some neat things with John's alter egos that were just brilliant. John also gave us a glimpse at the Manhunter's future that reminded me of when Space Opera was fun.

Don't forget GrimJack. It's back, baby! And it's still awesome.

I don't care who has to get hurt to make sure this happens.

And honestly, with the spotlight on Deadshot in Villain's United and Boomerang Jr in Flash, there's actually a bit more than a snowball's chance that this could happen. It probably won't, but a dream is a wish your heart makes.

Wow! Say the name "Ostrander" and one hell of a nerve gets struck.

David: Thanks for the linkage. Your Power Girl post is the blogosphere standard on superhero t*tties.

Ostrander was also one of the regular contibuters to Wasteland, DC's brilliant and inexplicably uncollected 80's anthology comic.

I'm shocked to see praise of the creation of Oracle while omitting the name of Ostrander's co-creator, Kim Yale.

You're absolutely right and I've fixed the omission.

I second the call for Showcase Presents Suicide Squad -- throw in the Deadshot mini-series and stuff like the Janus Directive crossover and you've probably got three volumes' worth of goodies.

Ravan and the Jihad.

The Gods of Ife.

Greg -- thank you! I thought no one was going to mention Grimjack, my all-time favorite comic book. Ostrander was great elsewhere -- Wasteland is another favorite -- but nothing ever touched his masterpiece, Grimjack.

I just did a bit on the formative years of Oracle the other week!

Yeah, Ostrander is the man.

Ostrander did serious writing and serious creation in a medium that usually asked for neither. Miss him at DC.