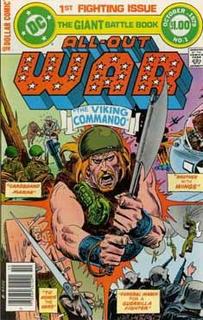 Give me a new version of ALL-OUT WAR featuring The Viking Commando. I don't care how. Just make it happen. It could be a frickin' teen romance comic featuring him, G.I. Robot and The Haunted Tank for all I care. I just want a comic with The Viking Commando in it. Dammit, he's got an ax! Probably a grenade, too. Let's add some atom bombs, as well. I wanna see a Viking going ALL-OUT with an ax, a grenade and an atom bomb. ALL-OUT, b***h!!!! Saying things like, "You know how we do!"

Then, I wanna see a Nazi wet his pants.

I wanna read that damned book!

Comments:
It is funny. I remember seeing the ad for this comic but never actually saw the comic anywhere. What is a Viking Commando? I don't know, but I'm sure it kicks mucho posterior.

Wouldn't that just be "The Worlds Greatest Comic Magazine"?

I just look forward to the inevitable Viking Commando/Thor showdown, where VC shows Thor that "Mjolnir" is the sounds that gurgles out of the Norse God's throat while his hammer is shoved down it!

And the exclamation point makes all the difference, my friend.

According to the Grand Comic Book Database, at one point the Viking Commando was declared insane and removed from active duty.

And yet, my love continues to grow.

You want All-Out War? How about a squadron comprised of Viking Commando, G.I. Robot, Sgt. Gorilla, and the Creature Commandos led by the Unknown Soldier.

my grandpa was drawing that comic when i was six years old. V.C's got a sexy ghostly valkyrie always hangin' around waiting for him to die and take him to valhalla so she can finally have her vixenish way with him, but he still seems into living. gramps also drew the strip "the losers" for "our fighting forces comics", neither names as bad@$$ as this book.