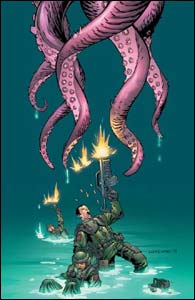 I'll freely admit I didn't know what it was. When they announced in one of DC Heroclix's, the addition of The Human Defense Corps, I just kinda shrugged and thought, "Well, I never use 'em."

I still don't know what they are. I still don't care. Judging from the name they shoot the monsters and villains superheroes are too busy to deal with.

They're no Checkmate. Cameron Chase and The D.E.O. point and giggle at these poor bastards.

They call it S.H.I.E.L.D. over there. Send them to Marvel where they can fight it out with these guys.

Supremacy of sucking must be established.

If they go to Marvel some HeroClixer may actually use them. Self-respecting DC HeroClixers never will.

Comments:
I actually liked and read the human defense corps...I'm like one of 5.6 people...but anyway, the idea itself makes sense. I'm curious what Republicans would do in the DC universe without a military...anyway, the DC universe really needs governments with ways of defending itself separate from the metihuman population...the arguments that lex luthor and max lord have make sense in some way that man kind is essentially castrated...so I'd keep the human defense corps and just change that name..

HDC was awesome. At least read the miniseries before sending the poor schlubs off to Marvel. TY TEMPLETON!

Like what Jacob said, you might want to read the miniseries first before judging it so harshly.

HDC was good. You should read it before you decide to ship them off. It probably isn't good enough to sway your decision, but it was an enjoyable series.

No need to take my opinion, though. I LOVED Power Company.

Actually, I more horrified by what you linked to:
a tragic Marvel ripoff of The Creature Commandos.

Who in their right mind would want to ripoff the Creature Commandos?