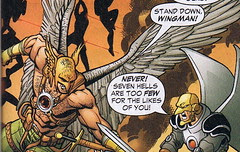 "Seven Hells!"
Originally uploaded by Devon Sanders.
Listen, I know I've been lame this week. I've contributed nothing to the blogosphere.

The short reason? I got sick. The Bird Flu. The media told me I'd catch it but did I listen? No! Like man idiot, I just kept living my life.

Now, you can tell everyone that you know somebody who knows someone who got The Bird Flu.*

Anyway, here's what I've got cooking for the coming days:

The final two of "Seven Reasons To Become A DC Comics Fan."

"Why I Hate Saturn, Rann And Space Cabby."

*I don't have The Bird Flu. I have the scurvy.

Comments:
So if you could only choose one to be afflicted with, which would it be?

Actually, I'd rather be making love.

So you're saying you've also caught the gay?

The fact that you hate Rann clearly marks you as a communist, my good man. No wonder you have bird flu if you prefer those Thanagarian birdbrains.

My word verification is "oyjypr"--which is what I'd say if DC ever brought back the Red Bee (most awesome hero of the Golden Age, apart from The King of All Drama GA Starman.)

"Seven hells are too few for the likes of you!"


Oh, and oranges cure both scurvy and The Gay.

Any who can side AGAINST Adam Strange has mental problems and is probably a communist.

Oranges might cure the gay, but they certainly do not cure the lesbian. Trust me on this one.

Hey, Kyle Baker had a graphic novel called "Why I Hate Saturn." or maybe I'm disremembering.

BTW: Am I the only one sane enough to realize that the Red Bee is TOTALLY STUPID? I mean, camp and corny is great and all, but they guy fought crime with TRAINED BEES! That's NOT cool!

Have you ever tried to train a bee?

Actually, Tim he RARELY used bees. He was basically like the Green Hornet, except with a more fun outfit and no chaffeur.