Seven Reasons To Become A DC Comics Fan No. 2 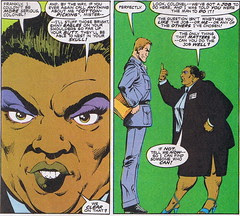 This scene can be found in Legends: The Collection trade paperback.

In The DC Universe, being a Black woman, in and of itself, is practically a superpower.

Comments:
I love her. You know why?

There used to be lots of fat people in comics. They weren't stupid or incapable. They were just big. Nowadays, even supporting cast members have to be model beautiful.

It's kind of like what happened on "The Real World".

Amanda Waller is "living" proof that comic book characters don't have to be dropdead gorgeous to be interesting, popular, or inspiring.

I want an Amanda Waller Barbie to fight with my Supergirl. They could just use the Rosie O'Donnell body mold. It would be perfect.

Amanda Waller for the win!

I was so glad to see her get badass face time on Justice League Unlimited.

Amanda Waller was one of the best damn characters ever created. I can't think of another character in comics who felt so...well, so much like a real human.

I also love her. But I'm not sure if the blue strappy heels they have her in are really in character for her. And they don't even match the overly heavy eyeshadow. Maybe it's a scare tactic...