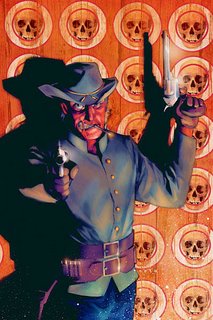 Comments:
Gotta agree. Anything that diversifies the medium is welcome-- why let the manga guys have all the fun? Back in the day, there was room in the spinner racks for everything, and if it wasn't all to one's particular taste, well... that's okay.
Time to move beyond the hegemony of heroes.

As much as I sometimes want to get all cynical and jaded, I can't help but get excited about a lot of the stuff DC has coming.

Lots of diverse stuff, even among the books that *are* "super-hero" books. Busiek and Guice on a sword-and-sorcery-flavored Aquaman? Hawkgirl by Simonson and Chaykin? Some cool stuff going on there.

Word is that WARLORD is coming back, too.