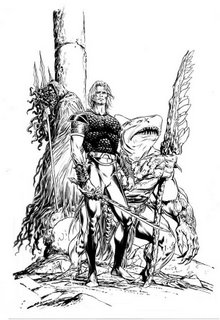 Comments:
Does Scipio get to be called King Scipio?

I don't know about the whole Aquaman, Sword of Atlantis story, but if it draws us closer to the King Arthur legends, I'll give it a shot.

Who knows, it might be readable since Busiek is writing.

But it has been intimated that the "Sword of Atlantis" won't be Orin...makes me fear that he will be a casualty of either Infinite Crisis or 52.

Isn't it ironic this post comes in the middle of the reasons to become a DC comics fan?

Too bad it comes at the cost of our dear Conan. By Crom, what a depressing weekend this has turned out to be (first Pryor, then Conan).
But hey, if Busiek made me a bigger fan of Conan than I ever imagined....maybe he can do the same for Aquaman: Sword of Atlantis...I mean Aquaman?

Also, Busiek does say several places that Orin will still be alive and will pop up from time to time. So unless he's lying, we won't see another casualty there.

mark -- I'm not sure that's a good selling point. I may be the biggest King Arthur fanatic in the greater Oklahoma City area, but I have never enjoyed it when they cross King Arthur of Atlantis with King Arthur of Logres. I think there's something unholy in the cross-mythology. And they keep doing it because of the stupid name. They should never have named him Arthur Curry.

And from what I've seen of Seven Soldiers, I can't say DC doesn't use the Celtic stuff right anymore.

Any title with a colon in it comes replete with the faint odor of earnest postgraduate lit-crit essays.

Another observation -- many things with colons in their titles, such as:

I will give ten dollars to anyone who tells Kurt Busiek that he has bumped his head and that he needs to sit his ass down.

I have, however, found an exception to the "colons indicate suck" rule. Pirates of the Caribbean: Curse of the Black Pearl did not suck.

I could make the joke that the reason it has a colon in it's name is to advertise the s*** within.

But I'm to good for that.

IMHO, the main problem with Aquaman is not the fact that he's married or whatever (Spider-Man has managed fine while being married to an incredibly hot redhead even though he's no King of Atlantis) but the fact that he's famous for being a joke. In the minds of many fans and people who are only slightly acquainted with comics, he is the embodiment of everything that's lame about comics. He is widely mocked because of the silliness of his powers and the goofy stories he appeared in in the Silver Age and in the Superfriends cartoon. To some extent, this isn't fair--plenty of heroes appeared in goofy stories in the SIlver Age and everyone came off looking like an idiot in that cartoon. All superheroes have some ridiculous aspect to them, but a good writer can get around that. Aquaman's power to talk to fish might be silly in many cases ("My friend Peter the PUffer Fish is calling me!") but if played properly they can be very cool. (Who can draw out the leviathan with a hook? Aquaman can.) The problem with Aquaman is that he was so much more obscure than the other JLAers (he never even made a cover appearance before joining the JLA!) so these problems were compounded for him. He also never had a particularly inspired interpretation of the core version of the character that really stuck. So when revamps and reboots became widespread, he kept getting revamped again and again without any of them really sticking. Additionally, becuase he is famous as a joke, all the revamps inherently look silly to the uninitiated. Hawkman had similar problems, but he was never as prominent as Aquaman so he was not as widely mocked even though he says "Wheet! Wheet!" all the time. Maybe Busiek's mojo could help surmount some of this, but even Peter David couldn't make Aquaman work in the 90's. Also, let's face it, Aquaman is a tool.