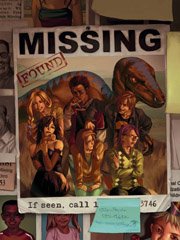 It pains me to announce that in the war of ideas, Marv...yeesh, I can't even type that word...Marvel Comics has, for once, trounced DC Comics.

DC offers Justice League Unlimited #1. A comic already reprinted and packaged in thousands of Justice League Unlimited figures. Same sh*t, every year, man. Look, I understand that you can't necessarily hand a kid a copy of most of what DC publishes, (too "adult," "too tied in to Infinite Crisis continuity") but damn, couldn't they do better than this?

So, you ask, "What would make you happy, Devon?" This: If you want to get young people hooked on Justice League Unlimited, give them something new to look at. Namely, a Justice League Unlimited comic produced especially for Free Comic Book Day. One where Superman, Batman and Wonder Woman literally sit down to go over part of The League's vast roster. Now, I know who every member of The League is but hey, even I would read something like that. As a retailer, I am fully aware that someone's first visit to a comic book store very well could be their last time in a comic book store.

While we're at it let's think about this, as well: Parents have to bring their kids into the comics shop for Free Comic Book Day, why aren't we able to offer the parents something as well? Could you imagine the potential readers comics could get if something like the first issue of Ex Machina were offered again as a giveaway or even a Jonah Hex #1? Instant interest, in my opinion.

So, yes, I'll say it: Marvel beat DC all to hell on this one. Free Comic Book Day was designed to bring in new readers. DC Comics needs to work a lot harder in order to help me keep them longer than just a day.

If DC really wants to remind people about Justice League Unlimited, maybe they ouughtta get Cartoon Network to air the damn show once in awhile!

I keeps it real.

As an underworked, overpaid member of the media, I've made over a million dollars over the last 10 years. But I wouldn't lay down the price of a comic book these days. If these companies want to attract readers and make money, they should lower their prices to 10 and 25 cents again. Don't tell me it can't be done. For a few bucks in Japan, you can buy a comic the size of a phone book.

Well, the readership in Japan's also a lot larger.

You can step off of a subway car and run smack dab into a comics vending machine.Here, not so much.

As with anywhere, more consumers equals better prices and besides those things are practically printed on newsprint.

Devon, have you forwarded this post to your friends at DC Marketing?

I think you should.

At the very least, they could run a commercial in a single small (ie, cheap) city, and then watch sales in the area to see if there was any short or long-term benefit.

If it works, they could roll out commercials in more cities in future years.

DC: We can't sell our comics to kids, they're too adult. But we need the money. Lets put out JLU for the 50th time. That won't do any good. They've already read that...

Really what is it with DC and their "We need kids into comics" atitude. It just won't work.

"The hell with kid apropriate stuff. We'll just put out some good comics."

Well uh...I think there's why it's Runaways, not She-Hulk, for example, that's getting the free comic. It is kid-appropriate...but it also happens to be more than appropriate for just about anyone else who enjoys a good comic.

It is about a bunch of teens and pre-teens, after all.

Marvel's got both bases covered, and DC could have easily done the same. Too bad...

(so score one for Marvel, yeah baby!)