"This one intrigues me, this Bueno Excellente, an associate of Hitman Tommy Monaghan, he defies classification. Is he man or myth, hero or villain, lunatic or vigilante?"

"With sinister giggling accompanying an unorthodox method of crime-fighting, his name has come to be whispered in Gotham's back alleys, striking fear into those who would chose a life of crime. Of course, like The Huntress before him, I would never actually sanction the severity in which he fights crime. His tactics though... harsh, I believe are somewhat... necessary, as crime has been down nearly one-hundred percent in certain parts of Gotham City, freeing me up to follow other pursuits such as my fledging Brother Eye project. I'll be keeping an eye on this one." 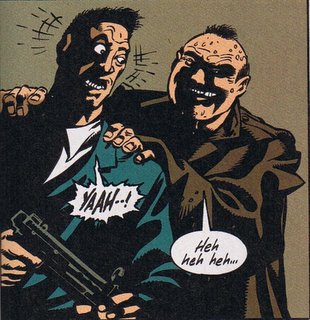 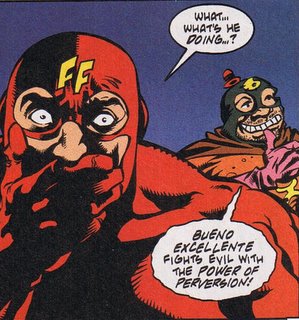 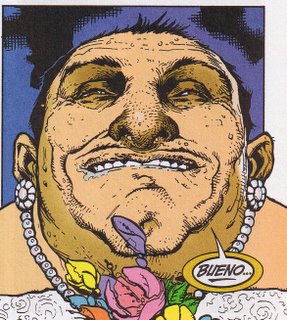 Comments:
that reminds me of Warren Ellis' essays; in one of 'em he says that Batman isn't threatening enough and that he should start collecting nipples. ' "I'm Batman, and I'm here for your nipples," he said with ice in his voice.' Creeeeeepyyyyyy...

How long will it take this time for a villain to break into Batman's Secret, Secret Files and use the information against the heroes!

Batman: Damn, Alfred. I've got to start locking the door to the Batcave.

hahaha that guy's name is rambo! like that movie! ADRIAAAAAAAAAN!

umm, on topic--who else wants a Bueno Excellente solo book?

I am the Earth-Here version of Bueno Excellente.

I even have that same dress.