I'd like to welcome Kyle Rayner to "Seven Hells!" as he's been elected as our regular Tuesday whipping boy . As St. Jude is the patron saint of lost causes...well...nothing says lost cause like Kyle. 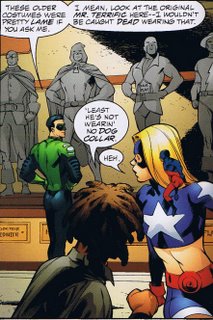 So, what do you do if you wield one of the most powerful weapons in the universe? You find the first fourteen year-olds you can find and in order to hide your own insecurities with manhood you start ragging on adults. The 'tweens, knowing an idjit when they see one*, rally around their mentors, leaving Kyle ass-out.

Dreadlocked Black child (fist clenched and ready to knock his bitch-ass out): One.

Meanwhile, The Atom, who always manages to find the time to rest his foot on the breast of a fifteen year-old girl, can only watch in horror as Kyle shows his ass, literally and figuratively, thinking:


...and as usual, Kyle Rayner, Adult is brought to you by the makers of... 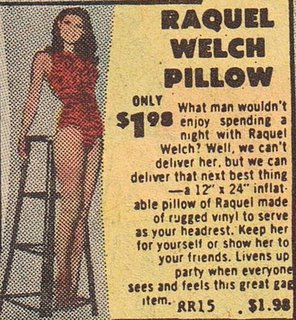 Comments:
What I find interesting is that Kyle is striking the exact same pose as Mr. Terrific.

Nice touch by the artist.

Hurray! Regular Kyle bashing! I couldn't agree with you more. I've never been much of a GL fan, yet even I was disgusted that Rayner usurped Hal Jordan's series. Is a sarcastic attitude (Day of Vengeance!) supposed to make you cool?

If memory serves, isn't this from JLA/JSA Virtue and Vice, when Kyle was possessed by one of the Seven Deadly Sins? That would explain the remark.

Yeah, Kyle was possessed by Envy ("I'm the true Green Lantern!" or words to that effect while he tried to whip up on Alan Scott). So maybe it is unfair. But he seems to be displaying more pride than Envy in that remark, since it's not as if stating he's envious of the original Mr. Terrific's costume (at least we hope not).

Now a Raquel Welch pillow for only $1.99, that would make any man crazed with Envy.

There's a good reason, dwinn. That kyle was chosen for Envy. Over the next few months, I'm gonna expose why.

I have seen this panel taken out of context before, BUT I EXPECTED MORE FROM YOU.

But seriously, I prefer Kyle. So do many awesome characters in the DCU, including one of the Endless.

License to blog revoked. I guess it's back to writing medical texts.

I have faith you will make your case!

I'm with rgreene, the joy of Green Lantern is that all characters are equally mockable.

And that is such a great angle on Kyle. I considered that one for my butt-post.

Oooh... are we going to see a giant blogwar over who's MORE MOCKABLE - Hal or Kyle? Now THAT'S a "whoo'd win" fight that I'd like to see.

I don't find Alan Scott all that mockable at all.

But I don't have any old Golden Age appearances on hand to analyze.

Golden Age GL can join in the mocking fun! Especially that last image - I don't think that Hal OR Kyle have ever had that happen to them...

I betcha Hal ordered that Raquel Welch pillow. Not only was he a swinging seventies hep cat who loved being the life to all the parties, he was probably powerless to resist that yellow-colored ad.

"What man wouldn't enjoy spending the night with Rachel Welch?"

I think I can answer that one...