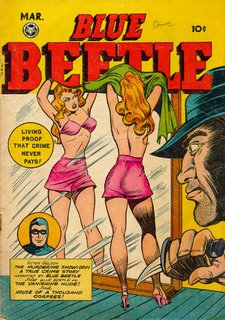 2005 was a great year to be a blogger. Writing this blog has been nothing short of sheer joy as the people who comment here have brought just as much to it as any post I could have written. That said, it's on to The Awards...

My Sincerest "Thank You" Award goes to:

My editor at Thor's Comic Column, Sean Fahey, for making me write after a ten-year absence, got me to love comics again and who after my mother died, helped me get back on the horse, so to speak. My boss and very good friend, Scip Garling who remembers that Wildcat, while rough around the edges, is JSA, all-the-way... and to my customers at BMC for feeding me.

Manhunter. It's got it all. A great writer in Marc Andreyko and a great artist in Javier Pina. Manhunter is a diamond flecked with bits of coal. The only thing it had been missing is some kind of direct legacy tie to a major DC character and as of issue 17, that was definitely been taken care of in a VERY big way.

The "Well, I Didn't See That Coming." Award:

Honorable Mentions: Judd Winick's run on Batman has been nothing short of great. Lightyears ahead, in terms of characterization, of the overrated Loeb/Lee Batman run of three years ago. Artist Doug Mahnke's is simply the most underappreciated penciller in comics. This is one of the comics I put on top of my comics stack in order to read first.

A Comics Retailer's Pet Peeve of 2005 Award goes to:

Comic creators who go on-line and suck at one store's teet as if that store were the exclusive carrier of their comic. More than one store helps put money in your pocket, thank you.

The "Listen To Me, I'm Wrong" Award goes to:

Devon Vincent Sanders of "Seven Hells!" for this magnificent post. I apologize.

The "Listen To Me, I'm Right" Award also goes to:

Me, for staying up for 24 hours, licking the toads and bathing buck-naked in cat urine in order to bring you this one whole year before any one else would.

Commenters who come onto your blog just to start shit. Listen, it's my party and I'll dance how I wanna dance. I don't have to argue here. You wanna slam-dance, set up your own blog and do it there. Not here. I created "Seven Hells!" to be a place for discussion and above all, fun. If you can't help me do that, well...there's always The DC Comics Message Boards. Good luck having a "discussion" there.

Best Blog of late 2005: Ragnell's The Written World. Sometimes, I actually like to think.

Finally, the moment you've been waiting for...

Blog of Year: 2005 saw the creation of many an excellent comics blog. Among them, the infrequent but nonetheless, excellent So So Silver Age, the mighty, invincible, uncanny Dave's Longbox and the coming of the patron saint of female comics bloggers, Scip Garling's The Absorbascon. Comics were reviewed and skewered with Khan-like wrath by the kids over at Two Guys Buying Comics. In 2005, in terms of sheer quality output, no blog came close to matching the always energetic Mike Sterling's Progressive Ruin, but in 2005, amongst the tragedy of Hurricane Katrina, one man stepped forward and provided America with exactly what was needed in a time of crisis:

David Campbell of Dave's Long Box, you are a true patriot and winner of "Seven Hells!" Blog of The Year Award!!!!

Step forward and receive your award of five warm cans of Milwaukee's Best. (I drank one.)

The world is watching you now. Make us proud, young man.

Comments:
Hey, thanks pal! I appreciate the "props" as you kids say.

Your blog is a regular stop for me, but I have to confess: I read Thor's Comic Column @ CHUD every week, and I've never realized that you were THAT Devon Sanders. I don't know how many Devon Sanders there could be in the world, but I just never put it together. Now I like Thor's column even better! You rule.

Wow, you pretty much just made my day, you know. Thanks!

Woo! Hoo! We have "Khan-like wrath"! And here all this time I just thought it was arthritis.

Thanks for the mention, keep up the great stuff yourself, and have a great 2006!

(Damn. I guess I'm gonna have to get me a photo or something to put on my comments. All the cool kids have one.)

All I want to know is, how is the lady on the cover keeping her bra on?