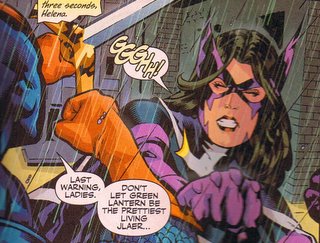 Well, Kyle is a rather pretty man. Even a one-eyed man can see that.

By the way, go to your local comics shop and check out IDW's art book, Swallow 2. Featuring artwork from Fables' James Jean, Runaways' Jo Chen and others, it will make you proud to be a fan of the comics medium. 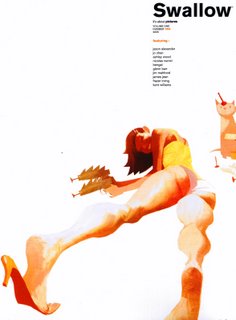 Comments:
Is it just me, or does trying to punch somebody with your eyes closed like that seem kinda ineffective?

And Jim Mahfood? I'm totally there.

Also, that line ties in my book for most hilarious with "Holy Crow, the boy's fancy?" which has officially entered my vocabulary.

Some books have a great line or two... This issue of Birds of Prey had like nine. It was fantastic.

You had me at James Jean.

It takes huge doses of self-control to stop myself from buying Green Arrow every month solely to own those covers of his. Similarly, I held the first issue of Amazing Fantasy/She-Scorpion in my hands for a good ten minutes before I convinced myself I would never even read the inside and thus it was not worth the cash.

Eww, I think I just made my self twitch.

If they'd let me just make Deathstroke gay, I'd be so happy.

That's the most oddly veiled threat I've seen in years in comics, and I'm used to entire soliloquies given during punch-ups.

I just want Huntress to have a big question mark over her head in the next panel, and Black Canary or whoever she's with, shooting her the shrugging "I dunno" gesture. "Uh, can you unpack that, Slade?"

If they'd let me just make Deathstroke gay, I'd be so happy.

That'd be the greatest thing ever, I think. Seriously. :-)