Will I Come With a Basketball? 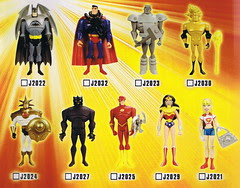 JLU Purse
Originally uploaded by Devon Sanders.
While at work the other day, I sold a lovely young lady a Supergirl action figure and I felt quite good.

As I prepared to put it in a bag for her, something caught my mahoghany eye. Earlier, one of my customers had noted that her cousin Superman came with the most kick-ass accessory of all-time...

A "Black Mercy." For those who don't know The Black Mercy was the plant Mongul used to ensnare Superman in one of comics' best stories of all-time, "For The Man Who Has Everything," later turned into an episode of the Justice League Unlimited cartoon series.

Brilliant. I was sold. My only thought was "I would have lost my frickin' mind if this came with my Super Powers Superman."

Now, with Supergirl, what do you put with the girl who bends steel in her bare hands?

Is it Mattel, the makers of Barbie and The Justice League Unlimited line knowing exactly what to do in order to sell a Supergirl figure or is it just Devon being Devon, making something of nothing.

Comments:
Well, judging from the photo, it looks like all the figures are required to have one (1) detachable prop.

That accounts for Flash's impractical Wristwatch of Death and Wonder Woman's fabulous Wondershawl for trips to the Ancient Greek Tragic Opera.

With Supergirl, without being naughty, what kind of prop WOULD she have? A superhairdyer/raygun would be nice -- but what does Supergirl, who IS a weapon, need with a weapon?

I simply LOVE the steel purse. I'm having one made in my size, actually...

Did you notice that it has a safe lock on it. The Flash kept "borrowing a dollar."

I dunno... should Supergirl come with a chunk of kryptonite? A miniature Streaky the Super-Cat? Problem is, there's nothing that people are likely to associate with Supergirl. A metal purse may be dumb but what the heck.

I see Aztek still gets the love. That makes me feel warm inside.

My problem is more the issue of size. While Kilowog and Bizarro, who should be significantly larger (and in the latter case, more hunchbacked) than other figures, are given standard body styles, Supergirl was made with, perhaps, a solid gram and a half of plastic. There's more material in her packaging than there is in the figure. That shouldn't work.

Meanwhile, Superman with Black Mercy is the best thing ever.

That goofy accessory makes it look like Wonder Woman's at the dentist, about to get her teeth x-rayed. Or Purple Rayed!

Now, the purse I could see making sense if it was with a Silver Age Batwoman figure -- and it would contain her "crime compact," natch.

What would YOU do with a basketball, DVS?

Not win a game.