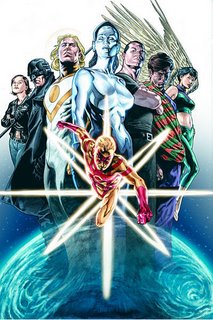 Everyone's talking about The Multiverse. What characters are to be absorbed into it? Will we lose our beloved JSA to it? Will Black Adam, who after gaining unprecedented popularity by staying away from The Marvel Family mythos, be brought low by a return to the "Tawky Tawny" ridiculousness of Earth S?

Could it be the key to crossing dimensions was shown to us in this issue? In it, Capt. Atom's been trapped in The Wildstorm Universe, unable to tap into the quantum field and unable to make the "leap" home to The DC Universe. When all hope looks lost for Atom, The Authority's Engineer whisks him away to their ship, The Carrier, which houses "The Bleed," a "door" that opens up to various worlds or parallel universes. "The Bleed" is, effectively, is the Wildstorm Universe's version of The Cosmic Treadmill.

Have we finally found DC's reason for spiriting Captain Atom off to The Wildstorm Universe, to show us a new "doorway" to The Multiverse? I guess we'll find out soon enough, won't we?

Ellis has already used the Bleed to get Planetary into Gotham City (well, the DC version of Gotham, because there's apparently one in the Wildstorm U, too) in Batman/Planetary, so the precedent's been there for a while.

Eh, sigh. So instead of actually having heroes (some of them, anyway) actually age and create legacies (the coolest thing about the JSA) we're going to take a giant step backwards and pigeon-hole heroes in their own little vibrational internment camps? Yeah, that'll be fun. Besides, nothing emphasizes the uniqueness of a character than having 257 separate versions of him or her floating around...

Nice theory and good use of what's already available.

"actually age and create legacies (the coolest thing about the JSA) "

We've never seen anyone "actually age". They were young in the Golden Age; they then were old and their "legacies" were already around when they returned.

I would rather have 257 versions of Batman than endure 257 arguments that he's actually "out of character" because different people think of him differently.

You're right about JSA, of course; but what I meant was, the JSA characters create a sense of age, having older, wiser, more experienced heroes around that train or inspire the next generation. Lord knows, NO ONE actually "ages" in a comic book. But I disagree about having Earth-Potato Batman. Fan Boys will always whine about something being "out of character" (and sometimes, they'll be right, i.e. "What are you retarded? I'm the goddamn Batman!"). But every additional Batman from another dimension diminishes the value of the character, causes him to lose his uniqueness. It also becomes a lazy literary device, an excuse to never make major changes to a book. "An earthquake destroyed Gotham? Thank goodness that happened over on Earth-3 M's and a Silent Q instead of here!" Normally, I'm a big fan of alternate history, but I like the timeline of the current DCU and I don't see any reason to change it basically because of some editor's whim.

I hope they do restore multiple Earths so they can do legacy heroes even better. Let Bats, Supes, and WW age on the main Earth...maybe even have one die soon. Let Nightwing or Donna Troy or whoever become leading characters in what's been the mainline DCU.

Note: multiple Earths doesn't have to mean you do things like separate the Shazam characters from the Earth 2 characters, or any other type of characters. We could call the Earth we've been reading the past 20 years 'Earth 8' (or whatever) and continue to follow the continuity as older heroes are gradually replaced by younger generations.

Multiple Earths is the only way DC will let the big 3 age (as anything other than a soon-to-be-reversed stunt), and will result in stronger legacies, not weaker.

That's what really excites me. I'd certainly read a new version of a young Batman with a good writer, but I'd really be excited to read about Dick Grayson and Barbara Gordon taking the lead of their Earth, where I knew DC wasn't going to undo it all in 2 years.

Methane, I think what you're describing is almost an Ultimate DC type of thing, and that could actually be cool. Unfortunately, cranky and cynical as I am, I see it as much more likely that this will be a DC version of the whole Heroes Reborn fiasco. Maybe they can get Rob Liefield to "reimagine" the Batman as a muscle-bound freak of nature with only two facial expressions.

Batman has another facial expression?

That hasn't happened since at least 1978!