Another Reason To Love The DC Universe 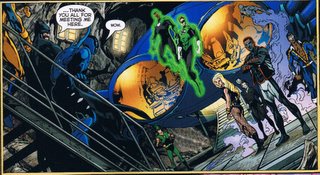 But this is my absolute favorite panel of Infinite Crisis #5.

Not to disregard the test pilot (Hal Jordan), the florist (Black Canary), the janitor (Booster Gold), a mercenary (Metamorpho), high school student (Blue Beetle) or the two billionaire playboys (Batman & Green Arrow) but I love the fact that a teacher (Black Lightning), an architect (John Stewart) and a scientist (Mr. Terrific) are there, as well...

and no one blinked.

You see, in The DCU, Black men can simply be. Whereas, in The Marvel Universe, you're either one of two things: A king (Black Panther) or a reformed criminal (Cage). There's honestly very little in-between.

I read DC Comics because I can't remember who said it and I'm paraphrasing here, "John Henry Irons (Steel) is the only one out there who besides Superman, deserves to wear The "S" Shield."

Why? Because he goes out there and earns it everyday with nothing more than the mind that was gifted unto him and the creations he builds with his own two hands.

That's why I am so looking forward to the upcoming mini-series, 52. John Henry Irons just may be poised to become the most powerful character to appear in its' pages...and he might not have to swing a hammer in order to do so.

Comments:
Extremely good point! When I saw this panel, I did wonder "Huh, so why did Batman choose these people, particularly?" And sorta figured it out, I think (wants a wide variety of "stuff to throw at an evil satellite" - electricity, sonics, green energy, funky arrows?) But the fact that there were three black men in the group neither struck me as noteworthy or unusual in any way.

On a tangent, does anybody know who the gal behind Mr. Terrific and Black Canary is?

Looking at the panel again, a possible answer to my own question is maybe it's Cyborged Sasha?

Fair point, Devon. But, then again, where are the Jews, the Asians, or the Latinos in this line-up? Overall, the DCU might be better mixed along black/white lines, but other "minorities" are still a bit under-represented, don't you think?

(Actually, I recant one point: As one myself, Jews might be over-represented, given the relative size of our population. But Latinos? C'mon!)

But, yes, the point is well-made for blacks as not "the exception that proves the rule" in the DCU. And, for that at least, we should be appreciative.

Dave L - at least in this particular lineup, Blue Beetle is Latino (as far as I can remember from his few panels). He's from El Paso, TX.

I think we should all be paying attention to the fact that we get the funky Black Lightning with the open bare chest costume! :-)

plus, why isn't he just called "Lightning"?

Devon's point is still well-made though. DCU is integrating subtly and meaningfully. Although, I would STILL like to see an Asian character that isn't a martial artist or samurai type (Batgirl, Katanna, Shiva,etc.).

Yes, but where is Green Arrow's face? Maybe it's The Question doing a cosplay thing...

DC actually has a plain old "Lightning" already, albeit part of a "Thunder and Lightning" duo.

Who, as it happens, actually *are* Asian heroes who aren't martial artists or swordsmen (despite their outfits suggesting such.)

Trust me, Dave, I feel you on this one. The only Jewish DC character I can recall off of the top of my head is The JSA's Atom-Smasher, who's currently serving a bid in a DCU jail.

They can do better than that.

Ragman (as he himself points out in IC5) is Jewish.

Half of Firestorm is jewish (Martin Stein).

The Seraph (duh) is jewish.

Other Jewish super-heroes (from Mikel Midnight's Jewish Supers List from DC include the Hayoth (an Israeli group from Suicide Squad), Dr. Fate II (Eric Strauss), Harley Quinn, Oberon, Sandman I, and The Monolith.

On that list I also notice Ray Palmer and probably Barry Allen (Hal once wished him a happy Hannukah in a Christmas special, but Hal is a dick).

And please, people, let's not forget that Dr. Light is a Japanese chick.

But you're right, Asian people mostly do kung-fuetry.

While we're imagining our rainbow coalition superteam, I'd like to see one (just one) Native American superhero who isn't a completely ludicrous stereotype AND a "magic user" with "magic" that is generic comic book "magic" utterly unrelated to any actual Native American culture.

Just for old times' sake.
You know, it still hurts when it's cold.

Credit where credit is due, the original Thunderbird of the X-Men wasn't too bad. Forge would've been okay, but they had to throw in some white guy's view of Native "shamanism" thus screwing it up. At least Forge was portrayed as wealthy and well-connected, didn't live "on the Rez," and was somewhat ambivalent about his heritage

I have to second the thought on the Native American character.

Where's the free will baptist girl from Oklahoma who was just in the right place at the right time?

I never realized that Black Lightning was so inspired by Phantom Lady that he tried to copy her costume design.

Whereas, in The Marvel Universe, you're either one of two things: A king (Black Panther) or a reformed criminal (Cage). There's honestly very little in-between.

Oh, oh, and you forgot that they *MUST* fight inner city crime!

uh, what they said

Hey, Grace Choi from Outsiders is Asian and not a samurai or martial artist. She's really strong and invulnerable and...um promiscuous. And bisexual.

With a name like Reyes, the new Blue Beetle is definitely hispanic, I'd say.

It's not perfect definitely, but I do think that DC's been at least making an effort to have different ethnicities and religions, more so than Marvel.

Marvel always seems to make a point of it, in my opinion. It's nothing I can put my finger on, but when I think of the black characters, the jewish characters (excepting Ben Grimm), the gay characters, they might as well be wearing neon signs saying "Look at how diverse we are!!" They're almost more caricatures to me.

I can't believe that you all forgot Skeets!!!

Skeets is what truly makes this panel fantastic!!!

Booster has totally sucked the past 10 years or so until Skeets came back and now look how cool everything almost is in the DCU!

Ok. Thank you for letting me get on my Skeets soapbox.

What's upsetting though is that you all can get your relatively non-stereotypical black superheroes and Jewish heroes but what about us Poles?

Other than Blackhawk, I can't really think of many heroes who are Polish or Polish-American!

I think we need a 6 month massive crossover series to correct this lack of Polska goodness.

(Note: I'd settle for a cool Polish super-villain even!)

As a kid, I thought "Black Lightning" was a cool code-name, and it had nothing to do with race. I pictured someone shooting black lightning bolts out of their hands (I'd never read a comic with the character, I just assumed that's what he did), and that would look soooo awesome. Maybe I ate a bit too much paste.

Naladahc brings up an interesting point - unless I'm blanking on some obvious ones, there really aren't many "European-origin ethnic" superheroes at all, are there, even for very large American populations, like Italian-Americans or Polish-Americans?

It's like by the time comics stopped making every single character a WASP, having a hero named Kowalski or Gianelli was already passé, and "diversity/relevance" efforts focused on other ethnic groups, so it never really happened.

The only Italian-American hero I can think of offhand is the Huntress, Helena Bertinelli, and she's got the stereotypical "Mafia princess" background.

I'm guessing that the Markov children could possibly count as "European-ethnic origin".

And the reason Booster has 'sucked' the last ten years or so is that the current crop of writers forget the amount of growth and tragedy in his life, first in his own series, then fighting Doomsday and now with Ted's death.

They only seem to zero in on the gimmick and that's a mistake. Hopefully, 52 will address this but I doubt it.

Well, I'm going to say your knowledge of blacks in the Marvel Universe needs some work.

There's lots of others too.

Actually, Anonymous, I could probably read almost anyone under the table when it comes to Marvel. I read everything. I just write about what I like.

Not great example for our people.
Just my humble opinion. Thanks

"Where's the free will baptist girl from Oklahoma who was just in the right place at the right time?"

If only she was from Tahlequah. But then, we're not exactly considered the "cool Indians"; no feathered headdresses, no noble and powerful horse warriors. In fact, the only non-Plains Indian superhero character I can even think of is Black Crow from Captain America 292, a paraplegic who was presented as Navajo (tho' of course, he didn't dress the part, and he was a steel worker in New York City, which you would think would make him Mohawk, but hey). The story has a lot of mystical hooey in it, but it is an interesting confrontation between Captain America and the sins of America's past, specifically the genocide of Native Americans.

Actually, now that I went back and re-read that issue, J.M. DeMatteis actually made some effort to present Navajo rituals in a semi-realistic light--he has his character take peyote, for example, burn yucca leaves and so forth. Not really his fault that Paul Neary drew the Navajo wearing feathered warbonnets and living in tepees (!) in the 20th Century (!) or portrayed Black Crow as wearing what looks like a bear skin loincloth.

It should also be pointed out that Ragman is both Jewish and Polish (as his father, the previous Ragman, emigrated from Warsaw)

Other heroes of Polish descent include the Juspeczyk's from Watchmen. And, jumping over to Marvel, Sasquatch (Walter Langkowski).

Black Lightning is just as bad as Luke Cage used to be and it took DC about a decade to emulate Marvel when it came to Black characters.

Neither company is any better at using Black characters than the other.

Of course Skeets is Jewish, Scip.
Do you see any foreskin on him?

Firestorm is black, and he's about to start his third year in print. Sales even appear to be picking up.

What the heck's up with Green Arrow's face in that panel? Has he come disguised as the Question or something?

I thought Marvel didn't need actual minorities because they have mutants, white people with super powers that represent minorities.

Of course, they weren't mainstream DCU, and their book jumped the shark after a year and was canceled within two -- but with Infinite Crisis, who knows WHAT gets to become canon?