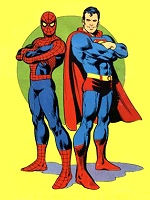 Should I be ashamed that I know that publishers actually can use the term "superhero" within their comic books, it just has to be used in a "proper" context. To the civilians out there, don't name your comic something like "The Superhero" and you should be alright.

Should I be ashamed that I can look at a headline and instantly start feeling like this guy?

Comments:
That is some bullshit. When someone says super-hero a cast of characters spanning not only the Marvel and DC Universes comes to mind, and not just additional characters from Image either. That's like trying to say," Hey when you think flying you think Superman so the word flying is ours now. You characters can only glide." or "The word 'comic' clearly refers to Spider-man from now on everyone else who isn't Marvel is publishing 'funny books.'"

Also how is one going to go about proving that when someone says super-hero they think Marvel or DC? Perhaps millions upon millions of little free response cards next Wednesday with the header "Write the first thing that comes to mind when you think super-hero" I would put money on the 9 out of 10 people would not write Marvel or DC they would write "Underwear on the outside" or "God damn Liefeld draws some big ass tits."

Well, you don't have to prove what people think when they say the word. When someone says 'kleenex' and 'xerox', people generally don't think of companies, they think of any tissue paper or copiers. But companies do own those trademarks, and you can't call your tissue paper 'kleenex', even if a random man on the street will call it that.

It's the same thing with 'super-hero'. Sure, we don't think of just Marvel and DC when we see that word, but they own the right to put that in their titles, and have for quite awhile. It's not a big deal.

I personally think their trademark application should have been denied, since they waited too long to apply for the trademark (it should have been before the end of the 1950's, I think), and the term had already slipped into public use. Nevertheless, the word was created from Superman (another word you can use in books all you want, but only DC can put it on a cover), and DC certainly could make a convincing case it should be their property.

My problem with the topic is that you have to read the same pile of knee-jerk, uninformed opinions about what it means each time, until someone shows up with the actual facts and sets everyone straight.

It's so tiresome, especially because, while you can certainly have a legitimate problem with Marvel and DC trying to enforce a trademark on "superhero," the terms of the debate are just so straightforward, and I'd love to see someone just make the argument baed upon those straightforward terms of debate.

"It's the same thing with 'super-hero'. Sure, we don't think of just Marvel and DC when we see that word, but they own the right to put that in their titles, and have for quite awhile. It's not a big deal."


The comparison to kleenex is laughable. Kleenex is a brand name that turned into a common word. Superhero is a common word, period. You'd have a point if there was a comic called "Superhero" published by DC and Marvel that they had to protect. As it is, there is no justification whatsoever for them pretending the word belongs to them.

This trademark has been held at least going back to the early 80's or late 70's. I remember seeing it noted on something (possibly Mego 8" Super-Hero (tm) figures).

Hmmm...I seem to recall DC published a comic called 'Legion of Super-heroes' at some point. I'm sure there've been a few others with the name that have come out in the last 60 years or so.

" Kleenex is a brand name that turned into a common word"

yeah...'superhero' is derived from the brand name of 'Superman', much like 'Batgirl' is derived from 'Batman'. That's a very strong reason not to let other companies use the name. Because it's become a common word doesn't mean it's not still protected