It's time for Kyle Rayner: Adult!

Imagine you're Kyle Rayner: It's your day off and what does your girlfriend Donna Troy do to you? She sticks you with her only son! Says something about having to go down to a courthouse so that she can get more visitation with her son, y'know, her wanting to be a good mother and all.

The Britney & Kevin of Comics. PopoZao!
So, now you're in charge of the apple of your girlfriend's eye and all you have to do is keep him occupied, so you take him to the zoo, but then your patented Kyle Rayner: Adult! "super-sense of self" kicks in and... 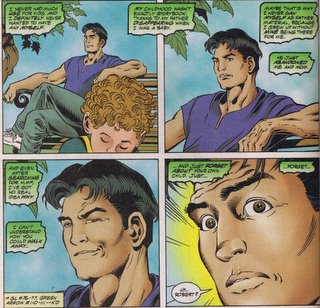 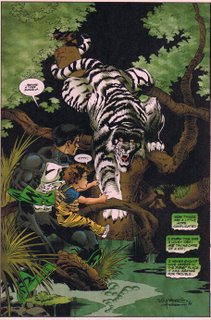 ... somehow ending up in Vegas, protecting him from a deathtrap designed by Siegfried & Roy.
In the game of life, when Kyle Rayner: Adult! meets Siegfried meets Roy meets Darwin, sadly the children must suffer.

Comments:
"The Britney & Kevin of Comics"

Is Donna so dense as to let the man who had the most screwed up childhood since Bruce Wayne watch her only child? She's lucky that losing him and a brief tiger attack was all that happened; she could've come back and to find that Kyle had the kid in a gimp outfit cleaning his apartment to "Hit Me Baby One More Time." Or some such nonesense.

Or she could have left him with her loser ex-husband, who's too much of a jackass to understand that driving in deep fog is a bad idea, and they could die in a horrible, tragic car accident.

Donna Troy is one Bad Mother.

Okay,
so you call them "the Britney & Kevin of comics" and still say that you don't actually HATE Kyle Rayner.

You know, I read that issue. I ahve to say in comparison to the context, you're going easy on him this time. It was one of those stories that cofirms it: Once Kyle's looks go, he's in big trouble.

And once again, I have to add, that Donna knows nothing about men.

Or people of any kind.

Or anything even remotely useful.

Pretty much, yeah. Some folks were just not meant to have children.

But damn if he isn't pretty.

Oh, this is priceless! If only had Rayner kept his head out of the clouds, everything would have been fine! Is this after he tells Donna that his mother is dead to him? Steven's comment was also news to me; Donna Troy really IS the Britney Spears of Comics!

Benn, yeah, this is after he fesses up about his mother.

In the next issue, they go to visit his mother, leaving her son with Terry (crash, splat), and the issue after that Donna gets "the call."

The issue after that Kyle meets an old friend and basically sees what his life would be like if he hadn't been handed a magic ring.

It basically confirms all of Devon's worst assumptions about what Kyle is really like.