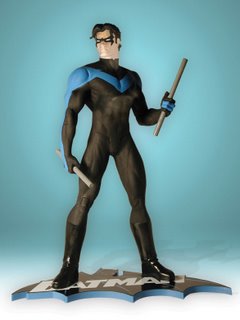 While reading Newsarama yesterday, guess which part of this article caught my beady little eye:

"Asked what DC book they aren't writing that they would love to write, Geoff Johns said he wants write Nightwing."

Oh, crap. Please let that happen. I need for this to happen. I'm losing Manhunter and I'm missing Nightwing already.

I need for this to happen so... I've decided to do something about it.

OK, let me change that. I'll commit to one year of almost anyone but Mr. Jones' Nightwing. Robin's Adam Beechen would be wonderful. Just... someone else.

So to all of Nightwing's fans I say this to you: money talks, b.s. walks. If you think one of comics' greatest creations deserves better than what he's been getting lately, write. Put your money where your mouth is. Let someone who can do something about it know.

Listen, I'm not trying to be pushy but I involuntarily stopped reading Nightwing. I wanna come back and I'm willing to pay the cost to do so. I'm gonna spend it somewhere. Why not Nightwing?

Comments:
I've met Nachie. He's a nice guy and smart too, so this could probably work if enough people write in.

But remember, he is a nice guy, so be polite and positive (I think Writer X should write Nightwing and I'm willing to pay money to see it happen) rather than negative and rude (Writer Y is hack and you're stupid for hiring him).

I don't know if Johns on Nightwing is the solution. After all, he is a self-professed fan of the Wolfman/Perez Titans and everybody who read Scipio's article on Nightwing knows why that's a problem.

Where was Johns during Devin Grayson's run? That's when the book really needed saving.

I'm not wild about what I've seen from Bruce Jones so far, but I think three issues is a bit soon to throw him under the bus.

If someone slaps you across the face 3 times, it's time to get out of that relationship. ;)

I am a firm believer in the fact that there is NOTHING Geoff Johns cannot do.

He can make me a Nightwing fan. I'll write my letter tonight.

Yeah, but they were light slaps. And after the three or four year beating I took from Grayson, I'm willing to cut him a little slack.

And really, after the past couple of years, I'm kind of Johns-ed out. If Waid or Morrison had expressed an interest, sure. But at this point, I'd rather Johns not take on yet another series.

Yeah; do we really need Johns writing yet another DC comic? Does anyone else besides Johns and maybe Gail Simone even write for DC's main line anymore?

So, yeah. Pretty much nothing but Johns over here. No variety whatsoever.


(okay, I only remembered most of those names off the top of my head. But once I looked up how to spell Palmiotti, I decided to complete the set.)

I wanted to pick up Nightwing OYL but forgot about the first issue and, apparently, I should be thnakful that I did. Nothing but awful reviews.

I'd pick it up if Johns took a stab at it. And hey, you know who also is looking for work? Marc Andreyko! I'd buy Marc Andreyko's Nightwing.

Damn, even though he's mostly been known as a Marvel guy, I should have threw in Christopher Priest as well.

Fabian Nicieza said he loved Nightwing, didn't he? He'd be a great fit.

If someone slaps you across the face 3 times, it's time to get out of that relationship. ;)

Geez, that's how I usually get INTO them..

What I can't figure out is why Geoff has to ask to be put on "Nightwing." He's D.C.'s go-to guy, for heaven's sake. You'd be hard-pressed to find anyone who's been more integral to their success in the last few years than Geoff Johns.

If Brian Bendis can exert so much clout at Marvel that Spider-Woman can get her own monthly, Geoff should be able to slap up Bruce Jones and take "Nightwing." ;)