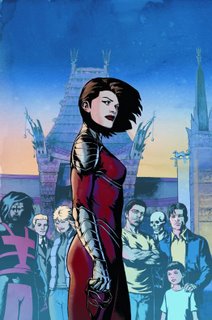 Manhunter 2004-2006
I'm beginning to think anything with the character Chase in it is destined to be cursed with cancellation. Needless to say, I'm going to miss this title. It's true draw for me was this incredibly flawed character. Kate Spencer smoked, she cursed and never had enough time for her kid but with that writer Marc Andreyko, made these her greatest assets. She was not perfect. You could see her working. You could see her putting in the work. In this polished DC Universe, she was a breath of fresh air. Marc Andreyko gave us a woman who sometimes acted like a broad but always, always was a lady. She was beautiful in her imperfection.
DC, I beg of you, let her story continue. Somewhere. Anywhere. She'd be brilliant in Checkmate. She'd be wonderful in Justice Society of America.
In a universe where characters shine 24/7, we need a character who isn't afraid to get some dirt under her fingernails. The good fight could always use someone like her.

Comments:
God damn it. x.x I loved this book. She was one of the very few comic-book anti-heroes who were done *right*.

Now I'm depressed. This comic seemed to get better and better with each issue.

I hope DC has the sense to keep using Andreyko.

Also cancelled was Marvel's The Thing, also on my list of good comics. Depressing week for comic fans.

I would love to see her in Checkmate! Great idea...which probably means we'll never see it happen. Dammit, Devon, why aren't you and Scipio on the board at DC? Do you need directions? (It's in New York!)

She'd be good in JSA, but for some reason I'm not so keen on the idea of Geoff Johns writing Kate. I've heard a few people suggest a new Infinity Inc. with her and Todd and some others. *shrug*

No, no, Infinity Inc is a cursed concept. She'd be dead in a week.

aaaah, the curse of the Manhunters - cancellation, still, that's one issue better than Mark Shaw.

I weep. Truly I weep.

See, I liked the Mark Shaw Manhunter, but I didn't read this new one because I thought it was doomed like every other Manhunter series. (Which means I wasn't helping, sorry.)
I keep bitching about this, but DC has some very cool characters that outright cannot carry their own regular title. Especially in today's market, but really: Creeper, Metamorpho, Enemy Ace, none of them are ever going to get a title past issue 20. Maybe the weekly book is the answer.

That totally sucks. I read the first arc of "Manhunter," and dropped it because I just couldn't afford it at the time. Now that I can, it gets canceled.

I've bought every "Manhunter" series D.C. has done (even the Chase Lawler series), and they all crap out. This is particularly galling, and a bad omen for the success of all the post-IC books.

Let me add my voice to the chorus of "nooooooooooooo"s. Although I wasn't too happy about the retcons to the other Manhunter series, I love Kate, love Chase even more (how can such a great character be such a curse?), even love smarmy Dylan, so of course it gets cancelled. Throw in the cancellation of The Thing and you have a very depressed comic geek who now has to figure out what other doomed books he should throw his money at.

It was the best DC book on the shelves. What now?

I 14th the motion -- this sucks. Well, I thought the book had an awesome start (especially with Saiz's pecils), and did well tying into Identity Crisis, but completely got bogged down in a pointless OMAC tie-in. It started to recover some of that with her dad, and I liked the first OYL book and had hopes for this book.

I don't know how well Kate Hunter/Manhunter would do in a team book. I don't think the JSA would tolerate her, y'know, blowing big holes in the bad guys. Much less smoking around minors. Checkmate's not a terrible idea, but still -- you'd lose so much of what made Kate Hunter an interesting character -- her kid, her ex, Dylan, etc.

Now I have this urge to track down this Chase series... (Cameron Chase, not Chase Lawler)

"Now I have this urge to track down this Chase series... (Cameron Chase, not Chase Lawler)"

You will NOT be disappointed.

People let the powers that be at DC know how you feel. I beg you to write to them and let them know that you are unhappy about this. Keep fighting the good fight!