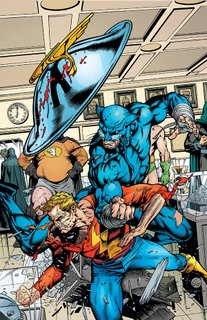 Today, I put my fist through a window. I had a good reason. My boss OK'ed it. It was for a worthy cause.
It needed to be done.

Needless to say, I discovered why Wildcat tapes up his hands before hitting something.
OUCH!!!

Comments:
Sorry about your hand, dude... but where's Kyle?

I'm kind of surprised Wildcat even needs to do that. You'd figure he'd punched so many things, his hands would be like rocks by now. Bad in terms of dexterity or fine motor control, but good for bludgening.

I have no idea why I expect that, just seems like something that would happen in comics.

Well, his hands would be incredibly hard - competition martial arts training usually entails some form of the sensei beating the hell out of you, as your bones get denser after repeated impacts. Muay Thai fighters spend hours kicking trees and stuff to harden their shinbones. Wildcat has been punching people for decades now, so his hands are going to be very much like rocks.

That said, you have to figure that he's taping up for those skulls that are slightly thicker than normal. In fact, you could assume that most of his foes have thicker skulls than normal from all the years of battering.

I don't want to pry, but what were the circumstances here? Did they involve a locked door and a key on the other side of a pane of glass? That's about the only situation I can vaguely imagine a boss-approved window-punching.

I hope there wasn't any fire or danger involved and you got your hand seen to by professionals afterwards.

Thanks for the concern, Vic. I'm absolutely fine.

All will be as normal as I can make it tomorrow.

As long as you're okay now, but next time, just yell. It's healthier, builds up energy, and gets people to stare at you.

Has anyone ever told you that there are decaffeinated brands which are just as tasty as the real thing?

My older brother did that once.

My sister and I locked our brothers out of the house one day while our parents were away (for, like, a minute, just for the record).