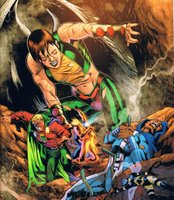 I may be wrong but it's never stopped me before. In 52, issue 4, Alan Scott loses an eye. 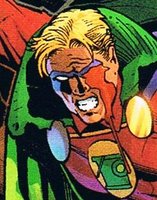 The big question is "What would someone want with Alan Scott's eyeball?"

Personally, I don't know why someone would want to steal someone's mystical eyeball. I mean, what could someone do with that?
# posted by Devon Sanders @ 5:17 PM

Comments:
I figured that's what happened to his eye as well.

Though why it enlarged to such huge size could take 1000 years to explain.

That was certainly my thought, too.

Would you happen to know who wrote the Alan Scott scenes in issue #5? For me, his scenes (and the reveal w/ Strange) made # 5 the best and most compelling issue so far. I've never read a comic w/ Alan Scott in it before. Should I check out the Johns' JSA stuff?

I've heard this theory before, and it makes sense to me. Of course, that means it'll end up being something totally stupid, random, and unrelated. :)

AP, I would definitely check out the trade editions of the Geoff Johns JSA run. It's got some stuff that I would argue is the definitive portrayal of Alan Scott.

If that was a Claremont panel, it would've had a caption saying

It's hinted that someone took both Alan Scott eyes, since he currently has the right eye of Adam Strange.

Alan Scott has since acquired his own personal mystic eye, courtesy of Jade. Is the "second new eye" I fear.

Is L.E.G.I.O.N. still in continuity? If it is, then I'm not sure about this since the Emerald Eye showed up there for a while. But if it's been retconned out then that's an interesting idea.

Well, there was at one point around Zero Hour, either right before the reboot or after it (not sure when).

I like the Emerald Eye of Erkon idea. Maybe it can show up as a GL villain in a couple of years...it's gotta do something while its waiting out the millenium.

The Anti-League of Lantern Appendages.

There were two Emerald Eyes floating around the L.E.G.I.O.N. book around 1990-91. Once they disappeared, I don't think we saw them again (or that they saw us). That was prior to Zero Hour.

After Zero Hour, there was only one Eye in the Legion universe that we knew of, that one in the 30th century (the one that Kinetix found, that later took over Shrinking Violet, that later bonded with The Empress).

This is an awesome idea. Egg-Fu awesome.

I want to see an entire Legion of Rejected Body parts. Like the Bladder of Kyle Rayner fighting with the Eye of Alan. Maybe even a Martian Kidneyhunter, a Wonder Wig from the "shorthaired Diana" era, and the Ultimate Super-dick-ery. No?

Isn't Scott, like, MADE of the magic green fire stuff? That's why he's not 90 years old on the outside. Did they undo that at some point, or just forget?

If that is indeed the case, it would make Infinte Crisis worth the hassle.