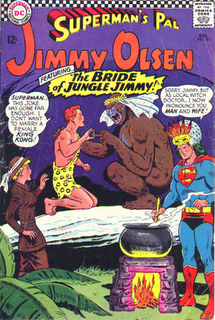 Last week, Scip posed a rather interesting question to me, "Are cows the Marvel equivalent of the MONKEY?"

Interesting question, that. "Are COWS the Marvel equivalent of the DC MONKEY?

Yes, we put our monkeys on pedestals but at Marvel they do the same but with the cow.

Hellcow (Howard The Duck foe. A vampiric cow in a silken cape.)

Those Four Skrulls that Reed Richards turned into cows (Realizing that these four Skrulls were going to forever plague him, Mr. Fantastic hypnotized the shapechanging Skrulls, forcing them to turn into the most content animals on Earth, dairy cows. They later got milked, ground up, turned beef, sold. They know how to party, Grant Morrison-style, over at Marvel.)

My vast research involving the gorilla/cow conundrum has yielded these simple results:

DC fans, we do love us some monkeys. We had it hard-wired into our DNA. It is well known that DC's Silver Age editors believed that a monkey on a cover, regardless of context or actual story content, sold comics. Love of monkeys has become a self-fulfilling prophecy.

At Marvel, the cow is viewed as benevolent, a nurturer, a level to be obtained. To view a cow as "evil" as in Hellcow's case, is the ultimate in obsurdity, hence its apperances primarily happening within a comic featuring a cigar chompin' duck.

At DC, a monkey just is what it is. Love of monkeys.

At Marvel, love of cows is much like a Marvel superhero's powers, best stumbled upon by accident.

That's soooo key to the character

Someone needs to bring that one back now.

No wonder I'm a Marvel fan!

Don't forget Taurus of the Zodiac. And Man-Bull. And Toro Rojo. (Not actual cows, but hey, close enough.)

Zombies are the new cows.

Ultimate Doom has the same feet as Toro Rojo, so HE'S bovine too.

so marvel is hindu?


and dumb, marvel is dumb.

This doesn't really prove Scipio's point, but since I was re-reading the New X-Men: Imperial TPB this afternoon, I thought I'd mention it. In New X-menwho 122, Smasher of the Shiar Imperial Guard traveled unaided through 4-Space to warn Earth of the imminent attack by the Mummudrai known as Cassandra Nova. He delivers the warning to a herd of cows.

As long as we're throwing the bull around about Marvel cow characters, what about Daredevil's onetime foe, the Matador?