I've missed my boy, Kyle and maybe not for the obvious reasons. After almost six months of doing these weekly Kyle Rayner: ADULT! posts, I need to tell you something:

When I started doing the "Kyle" post they were done with the sole intent of making myself laugh once a week. And they did but in the process, something weird happened...

I've grown to respect Kyle in ways I never could have imagined. Dare I say it, Kyle has even become my favorite Green Lantern. I'll tell you why. He reminds me of something greater.

Kyle Rayner was never chosen by The Guardians for the job of Green Lantern. Unlike Hal Jordan. Not like Guy Gardner. Not like John Stewart. Kyle did the job when no one else could. And he he did this knowing that a crazed Hal Jordan had just killed every Green Lantern before him.

When other men would have crawled up in a ball and died after seeing their girlfriend stuffed whole into a refrigerator, Kyle didn't run. No, he got up and tried his damnedest to carry on the traditions of The Green Lantern Corps.

When the self-styled "Killer of Green Lanterns" Fatality came to kill Kyle for Hal's sins, he took her on, assuming full responsibility for another man's wrongdoings.

When Batman openly questioned Kyle's ability to do the job, Kyle quietly carried on the tradition of having a Green Lantern within The Justice League.

He did all of this for no other reason than someone had to do it. Kyle Rayner had no Guardians of The Universe to guide his hand. He had no Corps to back his play when and if he fell.

Today is another matter entirely, The Green Lantern Corps have returned in their own series, no less, stronger than ever. Hal Jordan and The Guardians of The Universe are back, better than ever.

There will be a Green Lantern in the upcoming Justice League of America title.

Kyle Rayner. Armed with nothing more than a weapon and a sense of right & wrong, Kyle held the f*ckin' line until something greater than himself could emerge.

Not Hal Jordan. Not Guy Gardner. Not John Stewart.

Kyle Rayner.
That's when it hit me in regards to someone holding the line and seeded the fields in unchartered territories until something greater came along...

Mon'el.
Yeah, that's right. Kyle is The Green Lantern Corps' Jonah f*cking Hex, its' Mon'el. You've got your Hal, your Guy, your John back only because someone did the dirty work and held the line and seeded the fields.

Kyle is to The Corps what Hex was to The DCU, what Mon'el became to The United Planets. 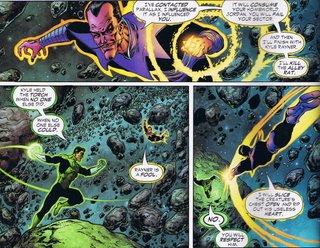 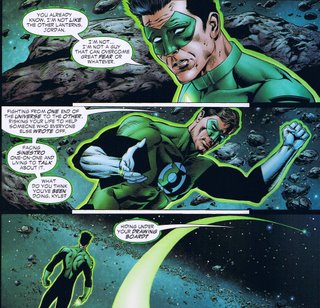 That said, Kyle Rayner: Adult! will return next week.
(Someone's gotta keep Kyle in his place...)

Comments:
You know, I like Kyle as much as the next guy, but if you listen carefully, you can just make out the sounds of Jonah Hex rolling over in his grave.

scotus: That's just Jonah laughing because he knows that women would choose him over Kyle every time (what with the lower mortality rate and all).

On a serious note, this is one of the best explanations of why Kyle is cool I've ever read. The fact that he rarely felt like he fit with all the legends on the JLA, that he was the rookie, and that only made him try harder to show he could hold his own, that he could - as you pointed out - maintain the Green Lantern Legacy. That's why Kyle was my favorite character in JLA.

This post wins my "COBB: OFF THE HAZENOSE" award for real.

I dropped the current GL series because Hal Jordan--the guy that everyone wanted back so badly--is being written like a walking, talking action-movie cliche'. The rogue maverick pilot who disobeys orders, beds every woman in a 500-mile radius, and ignores everyone else to do what he thinks is right--oh, and that line about how only criminals have something to fear. Blech.

Spare me the wish fulfillment of middle-aged fanboys. Kyle is a much more relatable, interesting, and enjoyable character, and he deserves respect. Here's hoping "Ion" makes enough bank to become an ongoing series. ;)

You know, that's just the same thing that happened with my learning to respect Hal Jordan.

Sorry, just wanted to see whether I could say that without laughing.

Kyle as the guy who's way out of his league but holds the line anyway is clearly why Morrison loved him in JLA. He had the audience's reaction to the crazy stuff going on around him, but actually had the power to get in the game.

He loved him so much that he's the ONLY character to appear in EVERY issue of Morrison's run.

Okay, neither he nor any other of THE SEVEN show up in JLA: 1,000,000, but Morrison made up for it by giving Kyle his GREATEST MOMENT EVER that very storyline!

I've always said that a big part of Kyle's appeal as a hero is that he didn't have any of the "classic motivations" for doing so.

It wasn't a birthright (ala Superman), it wasn't for revenge (ala Batman) , it wasn't out of guilt (ala Spider-Man) and it wasn't out of a higher calling (ala Hal Jordan). Kyle was a hero, simply because it was the right thing to do with the power he lucked into. And he certainly did "hold the line" for the GL legacy.

Kyle might never become as "iconic" as a lot of other heroes have, but when it comes down to pure respect for their reasoning for being a hero, Kyle's got them all beaten.

That is a F#&@ Yeah moment form Green Lantern Rebirth if I ever saw one. Come on, people. Give Kyle the love he deserves...

I liked how much JLA writers Morrison and Kelly seemed to like Kyle and write him better than anyone else. Under Morrison, Sandman (the Vertigo guy) tells Kyle that he will far surpass Hal. Kelly has Kyle die in ancient times and use his ring to keep his ghost around for another couple thousand years, just sitting in a cave trying to stay sane so that he could warn the modern heroes.

And how about that storyline in which Kyle hangs out with other superheroes trying to learn from them? That's so cute. And then in Supergirl, he almost sexes up his high school art teacher! Good job! Yay!!!!

You know, the same thing happened to me, but for Auqaman. I couldn't stop making fun of him , but I found that I slowly grew to love him. Weird, ain't it.