Supergirl isn't the only one who knows how to get her swerve on on with her cousin. Supergirl's Earth 2 counterpart Power Girl also knows a thing or two about the sweet Kryptonian art of cousin-buzzin'TM. ("Cousin-buzzin' " is trademark "Seven Hells!" LLC.) 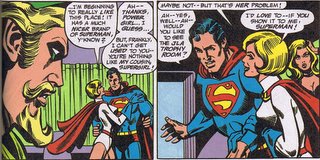 You know what the greatest part of this is? The look on Black Canary's face. It is the absolute perfect melange of amazement & bewilderment. This is the exact look you will have on your face if your neighbor knocks on your door, you answer it and said neighbor drops his or her pants and takes a dump on your doorstep.
"I can't get used to you-- you're nothing like my cousin' Supergirl." Translation: "M-m-my super-senses tell me that she isn't anything like my cousin, Supergirl. This girl, this Power Girl, will eventually try to convince that a woman can be...ON TOP?!?"

The popular misconception is that The Star-Spangled Kid is screaming "Power Girl!" because she's in some sort of danger. Star-Spangled Kid knows well the sound a man makes after being on the receiving end of a Power Girl "Dirty Sanchez."
Thank Rao, we got these two draft picks in the explosion, eh?

Power Girl's was just as kinky as Supergirl ever was! This panel makes one grateful for not only The Crisis On Infinite Earths and for retcons, in general. Thank God, there was no Comet The Superhorse to complicate things even further.
(Special thanks to Christopher Mah for showing me this panel.)

Comments:
Now I know why Krypton has laws against cousins marrying each other. The whole world would be like the Ozarks if they hadn't.

Actually, it's not a law, it's just an El family tradition (that the kids felt free to ignore once they got offworld). Why do you think the rest of the Science Council were such drooling idiots?

One of the things that's even more disturbing..I've been watching the Superman TAS dvds which introduced Supergirl..in the tv version-they never actually say that Supergirl is *actually* Superman's cousin! She just sort of goes along calling him that!

Can you imagine what kind of weird emotional weirdness that would cause if Supergirl WASN'T related to Superman?? Guilt from wanting to love humans all day, Adam & Eve-Krypton stuff AND a little bit of a 20 year age difference just to make it interesting...

Well, Kara In-Ze, Supergirl TAS, _isn't_ Superman cousin, he cames from a different planet too. Argo, in fact, that in TAS continuity is not a planet, but some kind of Kryptonian Colony, like the "Spacer Worlds" in Asimov, or the "Sides" in the Gundam manga.
Only, Kara In-Ze was dropped into suspended animation at thirteen, and seeing Superman in his late twenties "adopted" him as a bigger cousin.

Guilt from wanting to love humans all day, Adam & Eve-Krypton stuff AND a little bit of a 20 year age difference just to make it interesting...

Kara In-Ze playing Eve with Kal-El would be the most disturbing pedo thought ever, so disturbing that even the "cousin buzzin'" may seem a less sick thing...

The mystery deepens when some years later a grown-up (at least in her late teens-first twenty) Kara goes into the future to get Braniac 5.
May it be considered gerontophilia? Braniac 5, from Kara In-Ze POV, has yet to born, and even if biologically speaking Kara In-Ze was a late teenager/young adult, anagraphically Braniac 5 fell in love with a 1020 years old woman...