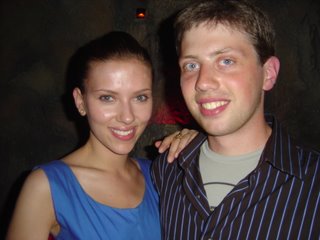 Above is a picture of former Big Monkey Comics employee Andrew Carl with Scarlett Johansson at the wrap party for the upcoming film "The Nannie Diaries."

I've been selling this guy comics since he was 10! Now, he won't return my calls.

He said I could run this, though:
Big Monkey Comics : The Official Comic Book Store of Andrew Carl.
# posted by Devon Sanders @ 9:12 AM

Comments:
As I am very aware, "Scarlett Johansson" does wonders for your stats.

As if we needed further proof that comics do, in fact, get you the girl. ;)

I gotta say, Scarlett's looking awfully anorexic in that photo. Are she and Keira Knightley sharing diet tips?