For those of us who love to bitch and moan TM ("Bitch and moan" is trademarked and sole property of teh intranet) about Grant Morrison's "overuse" of metatext as a storytelling device ("That bit in 52 #1 where The Question, looks put at the audience and says, "I can see you." Had to have been Morrison." It wasn't.), I say this to you:

If something works, let it. If Morrison wants to metatext himself dry, let him. As long as the man can produce a scene like this one from Seven Soldiers: Zatanna #4, let him. And you know why? 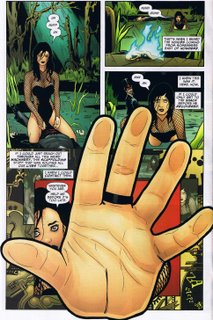 Metatext works in regard to the story he was trying to tell. Too many people chose to ignore the previous three and a half issues of set-up where Morrison presented us with a Zatanna sorely in need of inner being and self-confidence and when all else seemed lost, he had her reach out for help and you know what? It worked.

I'll be damned if I and nearly everyone else I've asked didn't touch their palms to hers.

That's a writer asking the reader to work with him. For me, that's essentially what metatext is, a writer asking you to come along, take a leap of faith and let the story take you someplace unexpected. Sometimes it works, sometimes it doesn't. We'll live, regardless, I think.

Comments:
The problem is that the first time Morrison did metafiction in comics, it made sense within the context of the story he was writing, and it actually meant something. Since then he's treated it as just another rabbit to pull out of an overstuffed trick hat. "Animal Man" was largely about the frustration of realizing you have no control over your life, as viewed through a fictional character who gradually comes to recognize his own fictionality. "Zatanna" wasn't about that at all; in fact, to the degree that Zatanna was about anything - and the series was probably the most muddled and confused of the Seven Soldiers books - it was about a character regaining control of her life. The "reach through the page" scene actually deflates Zatanna's theme, since it denies the character's autonomy to assert her fictionality.

The less charitable interpretation of Morrison's constant draining of this particular well is that he's a bit of a hack, constantly recycling his own ideas. The more charitable interpretation is that he's actually kind of nuts - that he honestly believes that the various fictional characters owned by DC comics are "alive" in some sense and that this is his way of communicating with them. I've always kind of hoped that isn't the case, and that his various gibberings about the "sentient universe" are part of his protratcted attempt to make himself the new Alan Moore, complete with random crazy ravings and a professed belief in "magic."

Keep in mind that this comes from someone who's generally a fan of Morrison and thinks that "Seaguy" is one of the greatest comics of the modern age. Morrison is very talented, but he's also incredibly inconsistent quality-wise, and part of that poor quality shows up in rehashing certain gimmicks and ideas even where they don't really fit.

Yeah. That was great.

One of my favorite single panels in comics ever. Jus' a great piece of design.

And I love all the meta-stuff. Akways have.

(Although, alright, the scene in Animal Man was just a TAD pretensious for my taste... If I'm gonna swallow meta-text I need a humour chaser.

It's just one of those comic things that make me smile every time.

I'm always reminded of Bugs Bunny 's asides aimed at the viewer. I like that kind of stuff. Goes all the way back to the earliest plays.It's a tool for pulling the reader into the story.

I like to think Morrison was just working within the continuity he'd already helped establish in the DC universe. If any DC characters besides Animal Man could glimpse the barrier between fiction and reality it would be the insanely powerful magicians, like Zatanna.

Isn't "Seven Soldiers" about invaders from an outside reality?

I've personally found Morrison to be of consistently high quality. (With a few exceptions; and he admitted that, in Animal Man, he pushed his views to the detriment of the story.)

And a sentient universe isn't any weirder than most explainations we have for the nature of the universe.

But notice that it seems to work real well in the DC universe and not really many other places. DC, I think, is a special case due to the fact that Earth Prime was meant to be our earth where we read comics about the goings on in the other earths. Taken a step further, comics also bridged Earths One and Two through the Flash reading about the Flash, and so forth. Really, it could be said that the real portals from Earth to Earth in the DC Universe lay in comics and the stories told from dimension to dimension.

I don't think it would work in Marvel. But then what does? Marvel tried it with that Iron Man, Peter Parter aside to the camera and it came off hacky and stupid. Why? Simple: Marvel is dumb.

Looks like I'm the devil's advocate, 'cause I liked that one too.