The Path Of The Tornado 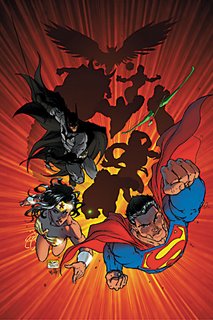 Was he pre-destined to die so that they may live? Will his resurrection lead them towards a path of enlightenment?

Judging by the cover solicitation for Justice League of America #2, it looks like the another triumpahnt return for The Red Tornado. I predict The Red Tornado will become a true fan-favorite in 2006. Why?

Will it be JLofA writer Brad Meltzer's handling of the character? Maybe?

Will new life be breathed into Reddy by the slick renderings of former Superman penciller Ed Benes? Maybe.

Personally, I believe he will become "Sensational Character Find of 2006" because we, as a society, love to see things explode. What else explains the popularity of a Jerry Bruckheimer film? Nothing explodes better than Red Tornado.

A brief history of Red Tornado's "devotion" to mankind:

Justice League of America, Vol. 1 #102: Red Tornado sacrifices himself to save multiples Earths.

The Crisis On Infinite Earths: Reddy blows up so big and good it causes a nearly seven foot tall man in a devil costume to scream, "EEEK!"

Justice Number One or Two: It happens so often lately, I can't remember which issue it happened in. The "Legion of Doom" uses The Tornado to take out The Justice League Sattelite. Well, given Red Tornado's past, isn't that what YOU would have done?

Justice League Unlimited #13: Writer Adam Beechen knowing a good thing when he sees one has The Tornado taken over by "sinister forces," go haywire, damn near self-destructing in another effort to save humanity. Good times.

Is it me or does it seem that The Red Tornado's whole reason for being is to be blown up, giving the heroes and the writer a chance to reflect on "humanity?" Has The Red Tornado surpassed Superman as the new messiah figure in comics? Or... is it just really easy to write an android blowing up?

(Special thanks to Christopher Mah for the research.)

Comments:
His Marvel counterpart-the Vision has only been taken apart 2 or 3 times I think... first time during that John Byrne run on West Coast Avengers, then a second time when She-Hulk punched a hole through him...RT still holds some kind of world record...I think he gets resurrected more times than Phoenix these days....:-)

I admit, every time I see RT, the first thing I think is "he's been ripped apart/reassembled again?" I lost track. Thanks for the rundown!

The bigger pimp move? Blowing up Batman and showering Red Tornado with the pieces. Now that would get a reader's attention. Booyah.

The Red Tornado really just wants to be Wildfire. However, Wildfire is superior to Red Tornado because Wildfire is an energy ball and so when he gets blown up, he can still float around and think pissed off grumpy thoughts. That ability to be pissed off about being blown up is what will keep Red Tornado from ever going over the top in terms of popularity.

He also got blown up by Amazo on the JLU cartoon. The frequent deaths of Red Tornado transcend all mediums.

Then there was that time those kids from across the street filled him up with M-80's and stink bombs...

I still say that the Sensational Character Find of 2006 will be Red Inferno.

You heard it here first, unless I'm wrong, in which case I'll delete this comment. :-)

"Or... is it just really easy to write an android blowing up?"

Bingo. For the writer who wants to demonstrate what a grave threat the JLA is facing by having a hero killed off, Red Tornado is the gift that keeps on giving.

The cover for #1 is actually a lot more clear on Red Tornado's return.

He's right there, underneath The Question.

I think it also happened in Justice League of America (Volume 1) # 129.

Who else wears a red suit that doesn't get beaten on all the time?

It is a fellow employees lament that it seems the Red Tornado's lot in life to blow up real good.
I just think it's the fleshy ones trying to keep the metal man down, yo.

Meltzer even makes fun of this very topic himself in the opening pages of Justice League of America #0:

I finally have the answer to the question "Who is the favorite super-hero of Big Jim McBob and Billy Sol Hurok?"