What do you get when you put Supergirl, Power Girl & Superman in the same comic book? 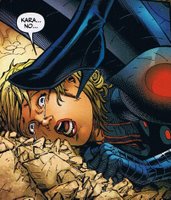 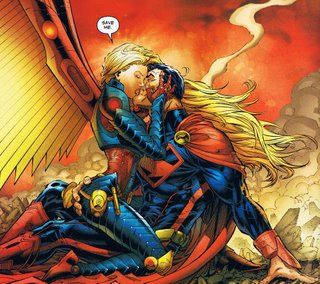 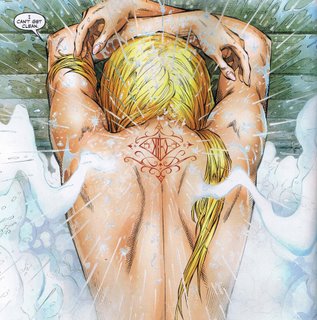 Comments:
Looks like my choice to jump ship when I saw "Joe Kelly" was a wise one.

Da FUG? That is SO wrong.

Sales for Supergirl just went up 500% here in Kentucky.

It's the return of the Silver Age, baby! All we need is Comet, the Super-horse and we'll have a REAL show.

Comet is now a transsexual half-lesbian, half-centaur, half angel comedian.

Last seen in Our Worlds At War. Probably erased from history now...

but it only takes one good writer with one good idea...

Graeme McMillan reviewed this book at the Savage Critic and rated as "Really Disturbing Whatever Happened To Quality Control Dan Didio Jailbait Supergirl Is Not Okay Especially When She’s Swapping Spit With An Evil Version Of Her Cousin Steaming Piles Of Crap From An Ass The Size Of The Moon Creepiness" which was the worst rating he could think of.

And that was without mentioning the Power Girl/Supergirl shower scene. Joe Kelly, what is wrong with you?

Anonymous -- It's a hand full of ass made from his own flesh and blood, though.

I guess we don't need to wonder what Lara's maiden name was anymore because it's now obvious which way the family trees grow on Krypton.

How wrong is it that my first response is to...

Someone please give her a sandwich?

Is it just me or are there no redeeming qualities to this modern version of Supergirl at all.

I have never been able to enjoy the Michael Turner elfin-emmaciated waif look or the fact that her personality never seems to make any sense to me.

I just do not get her appeal at all.

Well, a friend of mine argued that this evil Superman is actually Ultraman from the Crime Syndicate, and so I guess technically is not related to her.

That being said, if Power Girl were to snap both their necks and kill this book forever, I'd be totally OK with that. I mean, "Obsidian Age" taught me Joe kelly writes stuff that's confusing, but that was confusing/awesome. This is just confusing/gag reflex-inducing.

I'm of the mind that some of the incredible insanity in this issue can be contributed to the fact that he has to run with the crazy Jeph Loeb came up with and has to continue a story started by someone else.

Though honestly, that's probably just me being generous...

I'm not reading Supergirl, so your entry was the first exposure I've had to those pictures. My soul just threw up a little.

For THIS Linda Danvers gets Super-Sunday-Punched out of continuity?

Here's a thought. Joe Quesada has engaged in a total scorched-Earth campaign against everything Grant Morrison did for Marvel since the latter jumped to D.C. Why does Dan Didio persist in trying to salvage train wrecks like this and "Superman/Batman," now that Jeph Loeb has jumped across the river himself?

Something Kalinara said makes me think that this, ah, deeper relationship between Kara and Evil Kal might be a ruse so that she can get close enough to murk him.

That preserves a veneer of rationality over what is, otherwise, a very flagrant need to call Child Protection Services. :)

By the way, the code word for this entry was "TEX," essentially. How great is that?

Um. Jeez. I mean, I read Graham's review of this, but... uh. Yeah. Mere words couldn't quite prepare me for that. Yeesh.

From her first appearance in the book, I've chosen to believe that the Supergirl currently featured in LSH is actually a different character than the one in the actual Supergirl title. I think I'll continue down that particular path of delusion, thanks so much.

So, you think if we all pitched in and sent Joe Kelly enough money to order Cinemax, he'd stop writing stuff like this?

"So, you think if we all pitched in and sent Joe Kelly enough money to order Cinemax, he'd stop writing stuff like this?"

That comic HAS to be stopped.

I had this on my pull...i had hoped it would get better...it just gets worse and worse.

I will no longer buy this title.

The supergirl tale in Superman/Batman was bad but this regular series stuff is total crap.

Also, I've never cared for the skinny underfed image of this current Supergirl.

Long Live Power Girl---get her out of this nightmare book now!

If I get a boner from this, does that count as DC breaking the fourth wall?

>Someone please give her a sandwich?

Now that someone mentions it, who else thinks Michael Turner would be a great artist for a Paris Hilton comic? Maybe she can team up with Lindsey Lohan.