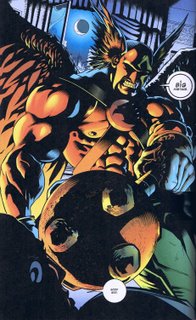 Due to The DC Universe's re-tooling during Infinite Crisis, many future possibilities have been eliminated in favor of a "New Earth."

We at "Seven Hells!" (Me and that guy standing over there.) have decided to show you, the reader, one of the many opportunities missed in favor of a "New Earth" in a little feature we've title "Seven Hells" New Earth Theatre.

Wildcat: (Still munching on that sweet-ass oatmeal raisin cookie) : For...?

Hawkman: The grandchild, Ted. I'm waiting for my grandchild.

Hawkman: I recently found out I have a grandson, Ted. His name is Daniel, he was born the Lord of Dreams.

Wildcat: You mean that sick looking kid I saw Jakeem trying to... he's yours?

Hawkman: That would be him. The pale, pale boy. His mother, Lyta, wants me to spend some... "quality time" with the boy. I don't know what she expects from me. For God's sake! Look at me, I'm Hawkman, damn it and he just so... not. 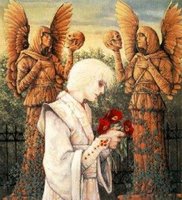 (Suddenly, Daniel materializes in the JSA foyer.)
Daniel: Hello, grandfather. I think I just dreamt a little Black child out of existence.

Wildcat: *sigh* I'm going to go see if The Red Bee's around. Good luck with that, Carter.

Daniel: It's good to see you grandfather. (Daniel leans in to kiss Hawkman on the cheek.)

How does it all end? Tune in tomorrow for more "Seven Hells!" New Earth Theatre...
# posted by Devon Sanders @ 7:58 AM

Comments:
That'd EXCELLENT, Devon. Forgive me, man, but I have to cross-post this at my blog -- Knocked me on my ass laughing!

Did Hawkman just swing his mace at his grandkid? Man, that's harsh.

Or is it just instinct, that anytime something mushy happens, Cater counteracts it by the manly act of swinging his mace.

It's Hawkman. Just don't question it.

Feel free to link 'til your heart's desire.

Maybe Death should show up and remind Carter they have another appointment in two years.

I mourn that fact that Sandman vs Hawkman jokes require such an advance degree of comicbook geekdom, because they're really very funny and yet very hard to share with friends.

By Odin's Raven, I AM eating a
sweet oatmeal raisin cookie as
we speak! Fresh out of the oven
too. Mmmmmmmmm warm cookie.
Ohh, and good post too.