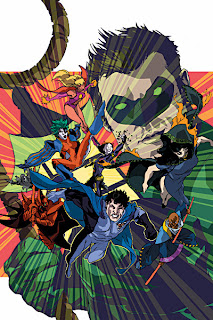 I feel like a buxom young woman in a red one-piece and hooker boots.

That's what I want but for now let's talk about comics.

I mean it in the sense that it took me nearly two weeks to wrap my head around something Kyle (Ion) Rayner did.

Did I just read that in Ion #10, Kyle finds himself in the Wildstorm Universe inside The Bleed, eventually meeting Capt. Atom, wearing The Monarch armor while fighting Daemonites and referencing the nuclear explosion in Bludhaven and towards the book's end, Kyle goes back to the DC Universe to to vanquish the denizens of the Tangent Universe.

My head hurts and it feels like old times and the old times felt good.

Comments:
"Kyle goes back to the DC Universe to to vanquish the denizens of the Tangent Universe."

Why doesn't he just sleep with them?

I'm slightly confused. Are we to assume that the Bleed that's been seen in Wildstorm Comics for years is in fact the same extradimensional space as the void between worlds seen in pre-Crisis DC Comics? And if so, does that mean that the the Wildstorm U and its associated other-Earths were part of the DC Multiverse all along? And if so, why did they not attract the attention of the Anti-Monitor? And does this mean that the Milestone Universe is coming back? And, and, and...