It Is Awesome Indeed!

Very little seems to make me happy, nowadays. Oh, sure, sipping brandy from the skull of an enemy is refreshing every now and then but should one do so everyday, it simply becomes pedestrian.

That's why I'm a firm believer in every once in a while doing one's self a kindness. Last month, I decided to indulge myself a bit and bought myself something I've been lusting after since the days of my mis-spent youth.

Growing up in the '80's, my pimping powers having not yet manifested themselves, all that seemed to float my boat was comics and toys. So imagine my happiness when publishers started doing comics about toys.

Last month, I treated myself to my Holy Grail of toy comics and went and purchased a copy of DC Comics Presents #47, the epic first meeting of He-Man and Superman!

The mechanism used to get these two together was contrived and the only thing more awkward than the dialogue was a duck with hooves but dammit, it was worth the price I paid for it for these five simple panels alone... 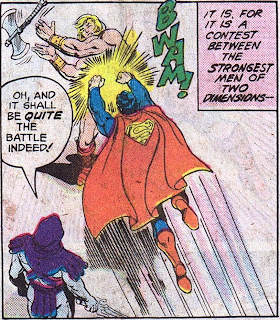 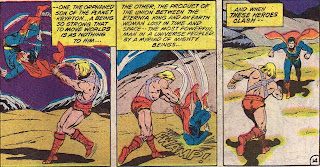 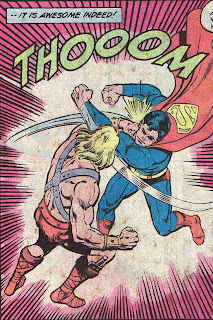 "IT IS AWESOME INDEED!"
Truer words have never been written.

I can only imagine what could have happened had I gotten my hands on this comic twenty-five years ago. My little head might have exploded and a cure for "Restless Leg Syndrome" would have been found amongst my ruins.

Now, having read this in my mid-thirties, the only thing that could possibly have made this comic anymore cooler would be G.I. Joe's Snake Eyes jumping out of my closet, playing the opening riff of "Walk This Way" while Salma Hayek, Halle Berry, Kristen Bell, Rosario Dawson & She-Ra wrestle naked in a kiddie pool full of baby oil to see who'll have sex with me the longest and the hardest.

Labels: Masters of The Universe, Superman

Comments:
That comic belongs on your nightstand, next to your stack of Black Tail mags.

I find it hard to believe that Supe wouldn't wreck He-Man's shit pretty bad. I mean, He-Man doesn't have heat vision or the power of flight. He probably has bigger junk than supe though. Not that I would know first hand...

I took the liberty of a little photoshop. Backtracks aren't set up on blogger, but you can see it here.

Okay this is getting freaky, but--once again--great minds are thinking alike. Look at what I posted at the beginning of last December:

My reaction was similar to your own

I'm actually surprised Sims never picked up on this. I mean, there's not only He-man and Superman, but there's some SERIOUS PUNCHING.

I'm pretty sure that that was the first comic I ever had. It is indeed AWESOME.

Devon, I was just reading Back Issue Magazine (#16, which is all about comics based on toys... you should pick it up. TwoMorrows publishing) and commenting to my girlfriend about how cool this very issue was... completely freaked my 7-year-old shit when it came out. Superman and He-Man teamed up again in Masters of the Universe #1 (the DC produced 3-issue mini-series).