Reason Number Four To Love The Smartest Man In The World 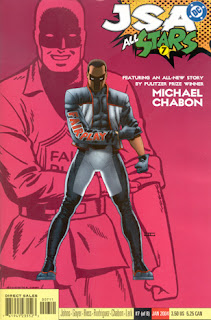 Remember a few years ago when Marvel was trying to find a Black Captain America.
*shudder*
The fan response seemed so overwhelmingly negative that at one point I just wanted to leave Marvel Comics alone for a good long while.

I believe Marvel started it all with the best of intentions but unfortunately, let the fans make the ultimate decision for them, leading "Truth" to become a nearly forgettable footnote in the vast history of Captain America.

...like Marvel's Captain America.
Then, last year, he became a key player in one of comics' leading espionage organizations...

Why? Admittedly, Holt's predecessor, Terry Sloane was no where near Cap's league but Holt...

Holt's character arc has been well-handled. Without fanfare, without proclamation and probably subconsciously, he's become better than those who came before him.

For lack of a better comparison, if you want a Captain America comic, pretty much all one would have to do is pick up a DC Comic.

Because Michael Holt could definitely claim that title. He doesn't suffer the same personality problems as the other contenders for highest intelligence: Batman (Sociopath, depending on who is writing him), Lex Luthor (Megalomaniac, lack of common sense).

So, what's the next reason to love him?

His atheism has got to be in there somewhere, surely. It's one of the things I most like about the character.

Some people think that his atheism is a flaw (and some writers have tried to 'correct' it), but I'm glad that he always goes back to scepticism.

After all, the DC Universe is full of Gods, Demi-Gods, Demons, Aliens, humans who claim they're Gods and so on. But do you believe them?

And even if God does exist in the DC Universe I find it hard to believe he has more power than, say, the comics version of Grant Morrison in Animal Man.

And so I think that Michael Holt's atheism is very wise.

It's a reason to love him!

This almost makes me feed bad for liking Truth which I found to be a strong story.

I'm not sure that atheism even HAS a real definition in the DC universe..I mean, in theory...spiritual entities, such as souls, gods, etc. CAN'T be proven...its a metaphysical realm..but in comics, they ARE real. Hell, the Spectre is a PHYSICAL incarnation of God's wrath!! You don't get more convincing than that!

Holt doesn't NEED to be an athiest! Everything in the DCU can be PROVEN.

What is a god? That's pretty much the question.

If I recall correctly, Micheal Holt actually was a fairly religious man, at least until his wife died. That pretty much shattered his belief.

I think it's no being he's ever encountered lived up to what he thinks a god should be.

Christopher
- The Gods of the DC Universe really aren't much different to the Aliens, except usually they have cooler costumes and gimmicks. Should they worship the aliens, now? After all, the Archangels backed down when faced by Superman.

- An atheist would think: 'Sure, there are things that claim to be Gods. But there are also 5th dimensional imps, psychic entities and all kinds of weirdness. Just because it claims to be the "embodiment of God's wrath" doesn't mean it actually is.'

Exactly. Think of Mr. Terrific as the super-powered version of James Randi or Daniel Dennett.

Not trying to downplay Mr. T's awesomeness, but what about Patriot of the Young Avengers? He's a huge reminder in one of Marvel's most popular (though on indefinite hiatus....ugh) titles of the Black Cap.

One of the things I like about Mr. Terrific and most of the legacy heroes in JSA is how they have slowly been brought to the forefront after being introduced years before.

What's really interesting about Mr. Terrific's atheist status is that he first appeared in The Spectre.

I've been saying for weeks now that Captain America is basically a DC character living in the wrong universe (roots in the Golden Age? red white and blue costume and high ideals? not a mutant?)

Warner should just get it over with and annex Earth 616 into the multiverse by buying out Marvel's shares, then move Cap à la Captain Atom's move to Wildstorm.

If Truth seemed like a failure to some readers it's that it wasn't - to me - an attempt to introduce a new, ongoing character, another earlier Cap who could now come out of retirement and team up with him or take over if he got, ahem, killed. I think it was Kyle Baker NOT doing that, at all. He wrote a tragedy, which stood out in a surreal way to his very cartoonish art that has a totally different effect in a title like Plastic Man. The whole point was he was telling an "untold tale" of a "forgotten" character who was going to remain mostly forgotten and that in itself was a statement. I liked the way another writer used that backstory to create Patriot with his particular set of conflicts. I don't think you can compare Mr. Terrific with the secret black Captain America or Patriot, even.

Actually, I was more comparing Mr. Terrific with Captain America.

I absolutely loved it that they were able to incorporate Fair Play into his costume and not only make it look cool, but even fashionable. It is almost one of the coolest costumes in comics.

Now if we could only lose the mask. That thing is hideous. Is it, like, glued to the inside of his lips? Does he stick the flaps up his nostrils? Does he even have a secret identity?

I would sooo be Mr. Terrific this Halloween if it weren't for the mask.