Reason Number Three To Love The Smartest Man In The World 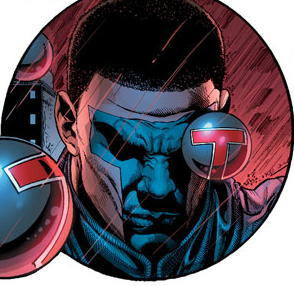 I mean, really. What's not to love about Mr. Terrific? He was unanimously elected Chairman of The JSA by men who, at one point, could never have allowed for his membership. Times have changed and in any era this man would be phenomenal. He walks daily through doors once closed to him. He represents what I think is right with the DC Universe. It is a universe where men who can move mountains display common sense.

Comments:
I am shocked, shocked, I tell you, at the high quality writing, plotting, and character development this guy's received. Along with Black Lightning and John Henry, I hope this is a sign of things to come.

He fills an interesting role in the DC U. He's had actually interesting and compelling personal struggles with religious faith. He's got a well fleshed out personality beyond "super smart" or "black man".

I'm about the farthest you'll ever find from any sort of forced 'affirmative action' placement or promotion, but the DCU needs this character. If non powered superheroes are really supposed to be the cream of the crop, they can't all be White or Asian. It stretches credulity.

When did someone start writing Black Lightning in high quality?

He's one of the few bright spots in the Outsiders right now. He also shows up just a bit in Checkmate, iirc. Not much, but there's hope.

And recently he gave up the chairman title to Power Girl, not before taking for himself a better position.

In fact JSA is becoming like European Public Administration, where to take the few spots still free you have to be the cousin of a (former) big one, the godson of a former man, the son of a current older member, the adopted daughter of a friend of a friend or the custodian cute unemployed nephew.

Terrific is good 'cause he outgrew his role of "legacy hero", becoming something much better than Sloane himself, and able to be "transplanted" from title to title. Whenether he touches, becomes gold, because he's a real man. He knows stuff, yeah, but he struggles with stuff. He's a man who gained Batman's respect without resorting to teatrical acts, only being himself and doing good work every day.

Black Lightning is a good black character too, but he was "forgotten" until now, for Lightining... I fear she will became the Renee Montoya of the 21th Century.

That would leave Terrific as the only real full-fleshed black man in DCU.